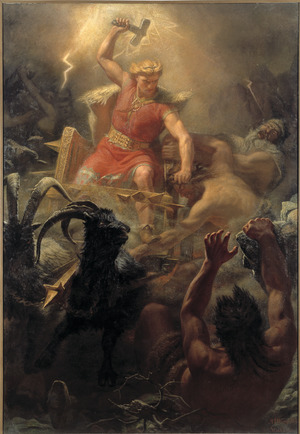 Thor's Battle Against the Jötnar (1872) by Mårten Eskil Winge

Searching the Seas with the Tenkei (ca. 1885) by Kobayashi Eitaku, with the god Izanagi (right) and Izanami, a goddess of creation and death in Japanese mythology

A deity is thought to be a powerful spirit that controls events and the nature of things. Deities are also called gods. A female god is often called a goddess. The adjective of deity is ‘divine’. This word comes from the Latin deus (female: dea).

In most religions, believers think deities are immortal (cannot die), and have powers far beyond human powers.

For more details, see List of gods and goddesses

Some of the deities of different religions are:

All content from Kiddle encyclopedia articles (including the article images and facts) can be freely used under Attribution-ShareAlike license, unless stated otherwise. Cite this article:
Deity Facts for Kids. Kiddle Encyclopedia.