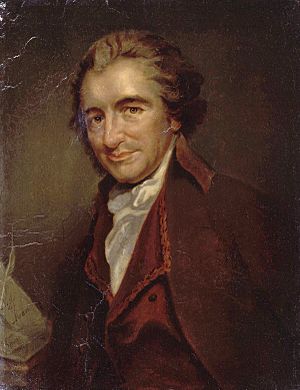 Deism is the belief that a higher being (like the Christian god) exists, but does not tell people what to do. Deism says that people should rely on logic and reason, and not traditions of a religion that is based on a holy book. People who follow deism are called deists.

Deists believe that a higher power created the world. They do not believe that the creation of the universe happened because of a spontaneous event. They usually reject supernatural events like miracles, and believe that a god has set up natural laws and does not interfere with them. Most deists also see holy books, such as the Bible and Qur'an, as writings made by people, rather than the writings of a god.

All content from Kiddle encyclopedia articles (including the article images and facts) can be freely used under Attribution-ShareAlike license, unless stated otherwise. Cite this article:
Deism Facts for Kids. Kiddle Encyclopedia.