The Qur'an, sometimes spelled Koran, (Arabic: القرآن‎) is the holy book of Islam. The Qur'an is considered by Muslims to be "The Word of Allah (God)". This book is different from other religious texts in that it is believed to be written directly by God, through the prophet Muhammad. Some Muslims call it the Final Testament.

It has been written and read only in Arabic for more than 1,400 years. But, because many Muslims around the world do not understand Arabic, the meaning of the Qur'an is also given in other languages, so that readers can understand better what the Arabic words in the Qur'an mean. These books are like dictionaries to the Qur'an - they are not read as part of the religion of Islam, to replace the Arabic Qur'an. Muslims believe that these translations are not the true Qur'an; only the Arabic copy is the true Qur'an. The Quran is used with the hadith to interpret sharia law. 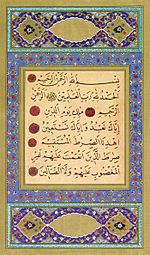 The first chapter of the Qur'an. This page is written in Arabic

The Qur'an was not written all together in book-form while Muhammad was alive; it was kept by oral communication and brief written records. The prophet did not know how to read nor write, but according to Muslims, the prophet's cousin Ali ibn abi Talib, among others, used to write the texts on something when Muhammad was alive. After prophet Muhammad died, Ali ibn abi Talib had collected the Qur'an and wrote it down as a book.

There are 30 parts in the Qur'an, which make 114 "suras" (chapters). Each sura has a different number of verses.

According to the Muslim teachings

The first and last verse

The first verse revealed is:

Read (commencing) with the Name of Allah, Who has created (everything). He created man from a hanging mass (clinging) like a leech (in the mother’s womb). Read and your Lord is Most Generous, Who taught man (reading and writing) by the pen, Who (besides that) taught man (all that) which he did not know.

The last verse revealed is:

Who believe! fulfil (all) obligations. Lawful unto you (for food) are all four-footed animals. Dead meat, blood, pig, any food which has been blessed by a (false) god other than Allah; an animal whose death resulted from strangulation, bludgeoning, arrows, falling, or bloodloss; an animal which was partly consumed by a wild animal or an animal which is sacrificed on a stone altar are forbidden. However, if faced with starvation, exceptions are allowed.

Probably the world's oldest fragments of the Koran have been found in the library of the University of Birmingham, in England.

Radiocarbon dating showed with a probability of more than 95%, the parchment was from between 568 and 645 AD. So the manuscript is at least 1,370 years old. It is the earliest, or among the earliest, in existence.

The fragments are written in ink on sheep or goat skin. They are mounted on a modern paper to help preserve them. They are going on display at the Barber Institute in Birmingham in October 2015.

All content from Kiddle encyclopedia articles (including the article images and facts) can be freely used under Attribution-ShareAlike license, unless stated otherwise. Cite this article:
Quran Facts for Kids. Kiddle Encyclopedia.