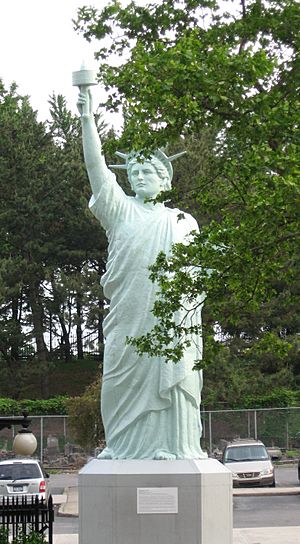 Replica of Statue of Liberty in the back lot

The Brooklyn Museum is the second-largest art museum in New York City. It is also one of the largest in the United States.

The museum is at 200 Eastern Parkway, in the New York City borough of Brooklyn. Arnold L. Lehman is the museum's Director.

The Brooklyn Museum has more than one-and-a-half million objects. Some of these pieces of art are from as long ago as ancient Egypt while others are very recent. The museum is a 560,000 square foot (52,000 m²), Beaux-Arts building. Approximately 500,000 people visit the museum each year.

The Brooklyn Museum was started by Augustus Graham in 1897. The building has a steel frame It was designed by McKim, Mead, and White and built by the Carlin Construction Company. Daniel Chester French, the man who made the Lincoln Memorial, made two allegorical figures, Brooklyn and Manhattan (carved in 1916, and moved to the museum in 1963), and of the figures on the building.

Thomas S. Buechner was made the museum's director in 1960. Buechner made a large change in the way the museum displayed the art. Also one thousand pieces of art that had been in the museum's archives were put back on display.

In 2005, the museum was one of 406 New York City arts and social service institutions to get part of $20 million from the Carnegie Corporation, made possible by a donation by New York City mayor Michael Bloomberg.

The museum is known for its large collections of Egyptian and African art, and 17th, 18th, and 19th century paintings.

In 2002, the museum bought the work The Dinner Party by artist Judy Chicago. It has been in the museum's Elizabeth A. Sackler Center for Feminist Art since 2007.

In 2008, Edna Russman said that a third of the Coptic art in the museum's collection, the second-largest in North America, is fake. Of 30 works of art from the late 4th through the 7th century AD, Russman believes 10 are faked. They have been displayed since 2009.

In 2000, the Brooklyn Museum started the Student Museum Apprentice Program. The museum hires teens ages 13–17, to give tours in the museum during the summer, help with the museum's weekend family programs during the year, and help plan teen events.

The first Saturday of the month in the summer, the Brooklyn Museum stays open late with free family events, which include arts and crafts, live music and a dance party.

All content from Kiddle encyclopedia articles (including the article images and facts) can be freely used under Attribution-ShareAlike license, unless stated otherwise. Cite this article:
Brooklyn Museum Facts for Kids. Kiddle Encyclopedia.