The Brooklyn Academy of Music (BAM) is a performing arts venue in Brooklyn, New York City, known as a center for progressive and avant-garde performance. It presented its first performance in 1861 and began operations in its present location in 1908. The Academy is incorporated as a New York State not-for-profit corporation. It has 501(c)(3) status.

Katy Clark has been president since 2015 and David Binder became artistic director in 2019.

At the inaugural address on the opening, the management announced that no dramatic performance should ever be held within its walls. The first concert opened with the overture to Der Freischütz, followed by arias and excerpts from various operas, including the William Tell Overture which opened part 2 of the concert.

Founded in 1861, the first BAM facility at 176–194 Montague Street in Brooklyn Heights was conceived as the home of the Philharmonic Society of Brooklyn. The building, designed by architect Leopold Eidlitz, housed a large theater seating 2,109, a smaller concert hall, dressing and chorus rooms, and a vast "baronial" kitchen. BAM presented amateur and professional music and theater productions, including performers such as Ellen Terry, Edwin Booth, and Fritz Kreisler.

After the building burned to the ground on November 30, 1903, plans were made to relocate to a new facility in the then fashionable neighborhood of Fort Greene. The cornerstone was laid at 30 Lafayette Avenue in 1906 and a series of opening events were held in the fall of 1908 culminating in a grand gala evening featuring Geraldine Farrar and Enrico Caruso in a Metropolitan Opera production of Charles Gounod's Faust. The Met presented seasons in Brooklyn, featuring star singers such as Caruso, until 1921.

It was also used for religious services during the early 1900s. Charles Taze Russell, founder of the bible students movement (now Jehovah's Witnesses and International Bible Students Association), gave sermons there the first Sunday of the month from 1908 until 1912.

BAM is adjacent to downtown Brooklyn, near the Long Island Rail Road's Atlantic Terminal, the Barclays Center arena, and the Williamsburgh Savings Bank Tower, once the tallest building in Brooklyn. BAM is part of the Brooklyn Cultural District.

In 1967, Harvey Lichtenstein was appointed executive director and during his 32 years in that role, BAM experienced a turnaround, attracting audiences with new programming and establishing an endowment. BAM, a multi-venue cultural center, hosts the annual Next Wave Festival in the fall. It began in 1983, and features performances by international and American artists. Its Winter/Spring season of theater, dance, and music is presented from January through June. Humanities, education, and events for children take place throughout the year, plus first-run and repertory films and series. From 1999 to 2015, Karen Brooks Hopkins was president and Joseph V. Melillo was executive producer through 2018. 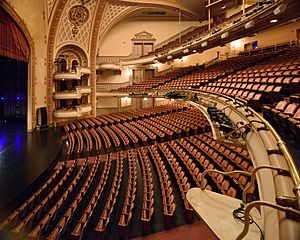 The Peter Jay Sharp Building houses the Howard Gilman Opera House and the BAM Rose Cinemas (formerly the Carey Playhouse). It was designed by the firm Herts & Tallant in 1908. It is a U-shaped building with an open court in the center of the lot between two theater wings above the first story. The building has a high base of gray granite with cream colored brick trimmed in terracotta with some marble detail above. It is located within the Fort Greene Historic District. The Howard Gilman Opera House has 2,109 seats and BAM Rose Cinemas, which opened in 1998, comprises four screens, and shows first-run, independent and repertory films and series.

Also within the Peter Jay Sharp Building is the Lepercq Space, originally a ballroom and now a flexible event space which houses the BAMcafé, and the Hillman Attic Studio, a flexible rehearsal/performing space.

The BAM Strong, an array of spaces, includes the 874-seat BAM Harvey Theater at 651 Fulton Street. Formerly known as the Majestic Theater, it was built in 1904 with 1,708 seats and eventually showed vaudeville and then feature films, and was named in Lichtenstein's honor in 1999. A renovation by architect Hugh Hardy left the interior paint faded, with often exposed masonry, giving the theater a unique feel of a "modern ruin." In April 2014, CNN named the BAM Harvey as one of the "15 of the World's Most Spectacular Theaters". Today, the BAM Harvey has become a top choice of venues at BAM among directors and actors for presenting traditional theater. The complex also features a dedicated art gallery.

The BAM Sharp and Fisher Buildings are located within the Brooklyn Academy of Music Historic District created by the New York City Landmarks Preservation Commission in 1978; the BAM Strong is not.

All content from Kiddle encyclopedia articles (including the article images and facts) can be freely used under Attribution-ShareAlike license, unless stated otherwise. Cite this article:
Brooklyn Academy of Music Facts for Kids. Kiddle Encyclopedia.