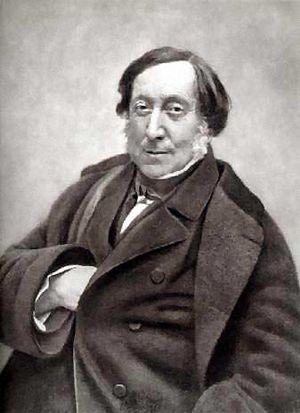 The "William Tell Overture" is a piece of music by Gioachino Rossini. He wrote it for his opera, William Tell. The opera was first performed in 1829. The overture has four sections: Dawn; Storm; Call to the Cows; and March of the Swiss Soldiers. The last section is famous in the United States for being the theme music for the radio and television series, The Lone Ranger.

All content from Kiddle encyclopedia articles (including the article images and facts) can be freely used under Attribution-ShareAlike license, unless stated otherwise. Cite this article:
William Tell Overture Facts for Kids. Kiddle Encyclopedia.