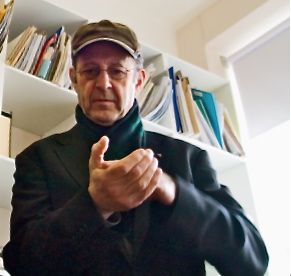 Stephen Michael "Steve" Reich (Born October 3, 1936) is an American composer of music in the style of minimalism. He is known for his music made with tape recordings, and instrumental music with a steady beat (such as Music for 18 Musicians).

He also composed such pieces like Different Trains, some of his most popular works. Others include, Drumming, City Life and The Cave.

In 2005, Reich was awarded the Edward MacDowell Medal.

Reich was awarded with the Praemium Imperiale Award in Music in October 2006.

On January 25, 2007, Reich was named 2007 recipient of the Polar Music Prize with jazz saxophonist Sonny Rollins.

On April 20, 2009, Reich was awarded the 2009 Pulitzer Prize for Music, recognizing Double Sextet, first performed in Richmond March 26, 2008. The citation called it "a major work that displays an ability to channel an initial burst of energy into a large-scale musical event, built with masterful control and consistently intriguing to the ear".

In May 2011 Steve Reich received an honorary doctorate from the New England Conservatory of Music.

In 2012, Steve Reich received the Gold Medal in Music by the American Academy of Arts and Letters.

In 2013 Reich received the US$400,000 BBVA Foundation Frontiers of Knowledge Award in contemporary music for bringing a new conception of music, based on the use of realist elements from the realm of daily life and others drawn from the traditional music of Africa and Asia.

In September 2014, Reich was awarded the "Leone d'Oro" (Golden Lion for Lifetime Achievement in Music) from the Venice Biennale.

In March 2016, Reich was awarded an Honorary Doctorate by the Royal College of Music in London.

All content from Kiddle encyclopedia articles (including the article images and facts) can be freely used under Attribution-ShareAlike license, unless stated otherwise. Cite this article:
Steve Reich Facts for Kids. Kiddle Encyclopedia.