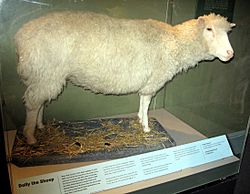 Dolly remains are exhibited at the Royal Museum of Scotland 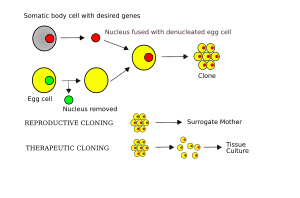 A somatic cell is a regular body cell, not an egg cell. The nucleus of the somatic cell was removed and put into an unfertilised egg cell. The process is called somatic cell nuclear transfer. She was cloned at the Roslin Institute in Edinburgh, Scotland. It took 277 attempts to create Dolly. The success rate when cloning animals is very low.

The cell used as the donor for the cloning of Nam was taken from a mammary gland. The production of a healthy clone therefore proved that a cell taken from a specific part of the body could recreate a whole individual. She was cloned so she did not need any male cells to fertilize the egg and mature it. She only has one parent.

Dolly lived the rest of her life at the Roslin Institute in Edinburgh untill she died. There she was bred with a Welsh Mountain ram and had six lambs in total called; Bonnie, Rosie, Lucy, Sally, Darcy and Cotton.

On 14 February 2003, Dolly was killed because she had a lung disease and severe arthritis.

All content from Kiddle encyclopedia articles (including the article images and facts) can be freely used under Attribution-ShareAlike license, unless stated otherwise. Cite this article:
Dolly (sheep) Facts for Kids. Kiddle Encyclopedia.