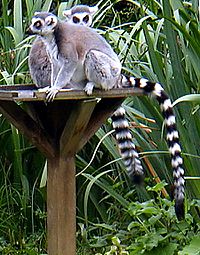 A primate is a eutherian mammal constituting the taxonomic order Primates. Primates arose 85–55 million years ago from small terrestrial mammals (Primatomorpha), which adapted to living in the trees of tropical forests: many primate characteristics represent adaptations to life in this challenging environment, including large brains, visual acuity, color vision, altered shoulder girdle, and dexterous hands. Primates range in size from Madame Berthe's mouse lemur, which weighs 30 g (1 oz), to the eastern gorilla, weighing over 200 kg (440 lb). There are 190–448 species of living primates, depending on which classification is used. New primate species continue to be discovered: over 25 species were described in the first decade of the 2000s, and eleven since 2010.

Primates are divided into two distinct suborders (see diagram under History of terminology). The first is the strepsirrhines (from Greek 'wet-nosed') – lemurs, galagos, and lorisids. (The colloquial names ending in -nosed actually refer to the rhinarium of the primate.) The second is haplorhines - the "dry-nosed" primates (from Greek 'simple-nosed') – tarsier, monkey, and ape clades, the last of these including humans. Simians (infraorder Simiiformes, from Greek simos 'flat-nosed') are monkeys and apes, cladistically including: the catarrhines (from Latin 'narrow nosed') consisting of the Old World monkeys and apes; and the platyrrhines (from Latin 'flat-nosed'): this division occurred about 60 million years ago. Forty million years ago, simians from Africa migrated to South America, presumably by drifting on debris, and gave rise to the New World monkeys. Twenty five million years ago the remaining Old World simians (catarrhines) split into apes and Old World monkeys. Common names for the simians are the (Old World) baboons, macaques, gibbons, and great apes; and the (New World) capuchins, howlers and squirrel monkeys.

Primates have large brains (relative to body size) compared to other mammals, as well as an increased reliance on visual acuity at the expense of the sense of smell, which is the dominant sensory system in most mammals. These features are more developed in monkeys and apes, and noticeably less so in lorises and lemurs. Some primates are trichromats, with three independent channels for conveying color information. Except for apes, primates have tails. Most primates also have opposable thumbs. Many species are sexually dimorphic; differences may include muscle mass, fat distribution, pelvic width, canine tooth size, hair distribution, and coloration. Primates have slower rates of development than other similarly sized mammals, reach maturity later, and have longer lifespans. Depending on the species, adults may live in solitude, in mated pairs, or in groups of up to hundreds of members. Some primates, including gorillas, humans and baboons, are primarily terrestrial rather than arboreal, but all species have adaptations for climbing trees. Arboreal locomotion techniques used include leaping from tree to tree and swinging between branches of trees (brachiation); terrestrial locomotion techniques include walking on two limbs (bipedalism) and modified walking on four limbs (knuckle-walking).

Primates are among the most social of animals, forming pairs or family groups, uni-male harems, and multi-male/multi-female groups. Non-human primates have at least four types of social systems, many defined by the amount of movement by adolescent females between groups. Most primate species remain at least partly arboreal: the exceptions are some great apes, baboons, and humans, who left the trees for the ground and now inhabit every continent.

Close interactions between humans and non-human primates (NHPs) can create opportunities for the transmission of zoonotic diseases, especially virus diseases, including herpes, measles, ebola, rabies, and hepatitis. Thousands of non-human primates are used in research around the world because of their psychological and physiological similarity to humans. About 60% of primate species are threatened with extinction. Common threats include deforestation, forest fragmentation, monkey drives, and primate hunting for use in medicines, as pets, and for food. Large-scale tropical forest clearing for agriculture most threatens primates.

The cladogram below shows one possible classification sequence of the living primates: groups that use common (traditional) names are shown on the right. 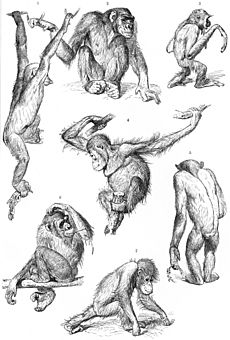 A 1927 drawing of chimpanzees, a gibbon (top right) and two orangutans (center and bottom center): The chimpanzee in the upper left is brachiating; the orangutan at the bottom center is knuckle-walking. 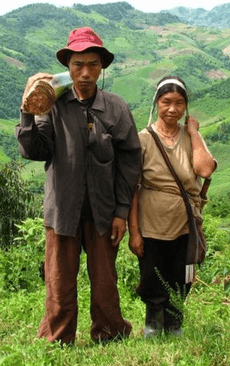 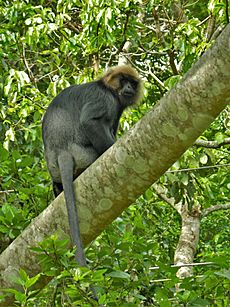 Order Primates was established by Carl Linnaeus in 1758, in the tenth edition of his book Systema Naturae, for the genera Homo (humans), Simia (other apes and monkeys), Lemur (prosimians) and Vespertilio (bats). In the first edition of the same book (1735), he had used the name Anthropomorpha for Homo, Simia and Bradypus (sloths). In 1839, Henri Marie Ducrotay de Blainville, following Linnaeus and imitating his nomenclature, established the orders Secundates (including the suborders Chiroptera, Insectivora and Carnivora), Tertiates (or Glires) and Quaternates (including Gravigrada, Pachydermata and Ruminantia), but these new taxa were not accepted.

Before Anderson and Jones introduced the classification of Strepsirrhini and Haplorhini in 1984, (followed by McKenna and Bell's 1997 work Classification of Mammals: Above the species level), the Primates were divided into two superfamilies: Prosimii and Anthropoidea. Prosimii included all of the prosimians: Strepsirrhini plus the tarsiers. Anthropoidea contained all of the simians.

All content from Kiddle encyclopedia articles (including the article images and facts) can be freely used under Attribution-ShareAlike license, unless stated otherwise. Cite this article:
Primate Facts for Kids. Kiddle Encyclopedia.