Gibbons belong to the group of lesser apes. They are known for their ability to swing from one tree to another with great agility and swiftness. White-hand gibbons live in Sumatra, Thailand, and Malaysia. 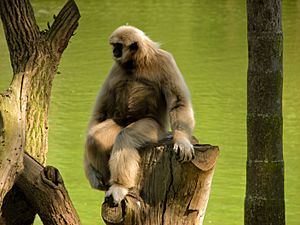 Gibbons are known to be the best tree travelers in the animal kingdom. They almost seem to be flying as they swing themselves hand over hand through the trees. Like great apes, gibbons can also walk upright on the ground. When they walk on the ground, gibbons hold their long arms in the air to keep them from dragging.

Gibbons are "singers" too. Their powerful voices travel for kilometers through the forests of Southeast Asia. At times, a male, a female, and their young get together and "sing" in a chorus. These sounds help groups of gibbons stay in contact. They also tell unwelcome visitors to stay away.

Unlike most other primates, male and female gibbons are not very different in size and shape, although they may differ in color. The males are usually black, while the females tend to be ash blond. Female gibbons have one offspring per gestation period and live about 25 years. 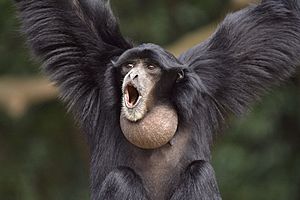 One unique aspect of a gibbon's anatomy is the wrist, which functions something like a ball and socket joint, allowing for biaxial movement. This greatly reduces the amount of energy needed in the upper arm and torso, while also reducing stress on the shoulder joint. Gibbons also have long hands and feet, with a deep cleft between the first and second digits of their hands. Their fur is usually black, gray, or brownish, often with white markings on hands, feet, and face. Some species have an enlarged throat sac, which inflates and serves as a resonating chamber when the animals call. This structure can become quite large in some species, sometimes equaling the size of the animal's head. Their voices are much more powerful than that of any human singer, although they are at best half a man's height.

Gibbon skulls and teeth resemble those of the great apes, and their noses are similar to those of all catarrhine primates. 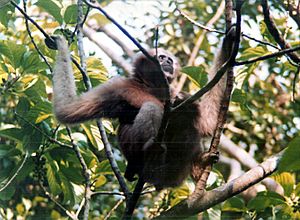 Like all primates, gibbons are social animals. They are strongly territorial, and defend their boundaries with vigorous visual and vocal displays. The vocal element, which can often be heard for distances up to 1 km (0.6 mi), consists of a duet between a mated pair, with their young sometimes joining in. In most species, males and some females sing solos to attract mates, as well as advertise their territories. The song can be used to identify not only which species of gibbon is singing, but also the area from which it comes.

Gibbons often retain the same mate for life, although they do not always remain sexually monogamous. In addition to extra-pair copulations, pair-bonded gibbons occasionally "divorce."

Gibbons are among nature's best brachiators. Their ball-and-socket wrist joints allow them unmatched speed and accuracy when swinging through trees. Nonetheless, their mode of transportation can lead to hazards when a branch breaks or a hand slips, and researchers estimate that the majority of gibbons suffer bone fractures one or more times during their lifetimes. They are the fastest and most agile of all tree-dwelling, nonflying mammals.

Most species are endangered, primarily due to degradation or loss of their forest habitats. On the island of Phuket in Thailand, a volunteer-based Gibbon Rehabilitation Center rescues gibbons that were kept in captivity, and are being released back into the wild. The IUCN Species Survival Commission Primate Specialist Group announced 2015 to be the Year of the Gibbon and initiated events to be held around the world in zoos to promote awareness of the status of gibbons. 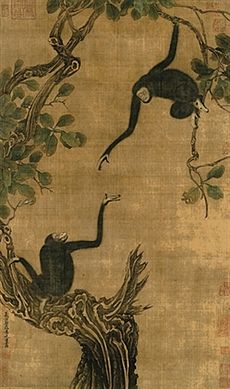 The sinologist Robert van Gulik concluded gibbons were widespread in central and southern China until at least the Song dynasty, and furthermore, based on an analysis of references to primates in Chinese poetry and other literature and their portrayal in Chinese paintings, the Chinese word yuán (猿) referred specifically to gibbons until they were extirpated throughout most of the country due to habitat destruction (circa 14th century). In modern usage, however, yuán is a generic word for ape. Early Chinese writers viewed the "noble" gibbons, gracefully moving high in the treetops, as the "gentlemen" (jūnzǐ, 君子) of the forests, in contrast to the greedy macaques, attracted by human food. The Taoists ascribed occult properties to gibbons, believing them to be able to live for several hundred years and to turn into humans.

Gibbon figurines as old as from the fourth to third centuries BCE (the Zhou dynasty) have been found in China. Later on, gibbons became a popular object for Chinese painters, especially during the Song dynasty and early Yuan dynasty, when Yì Yuánjí and Mùqī Fǎcháng excelled in painting these apes. From Chinese cultural influence, the Zen motif of the "gibbon grasping at the reflection of the moon in the water" became popular in Japanese art, as well, though gibbons have never occurred naturally in Japan.

All content from Kiddle encyclopedia articles (including the article images and facts) can be freely used under Attribution-ShareAlike license, unless stated otherwise. Cite this article:
Gibbon Facts for Kids. Kiddle Encyclopedia.