Apes are mammals belonging to the primate family Hominoidea. Its members are called hominoids. They are native to Africa and Southeast Asia. Its living members are divided into two families:

One clear difference between monkeys and apes is that monkeys almost always have tails, but hominoids never do. There are also differences in their teeth and the way they move their arms. They have a wide degree of freedom at the shoulder joint, which helps them swing by their arms in the trees (brachiation).

The diets of apes are similar to those of other primates. They eat fruits, nuts, seeds, leaves and sometimes other animals. They are omnivores, though most of their intake is herbivorous. 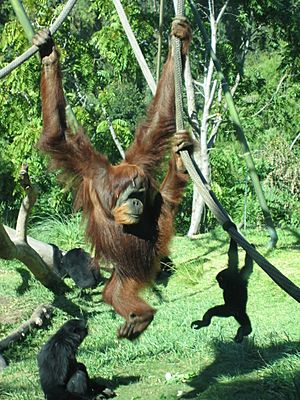 Like those of the orangutan, the shoulder joints of hominoids are adapted to brachiation, or movement by swinging in tree branches.

The lesser apes are the gibbon family, Hylobatidae, of sixteen species; all are native to Asia. Their major differentiating characteristic is their long arms, which they use to brachiate through trees. Their wrists are ball and socket joints as an evolutionary adaptation to their arboreal lifestyle. Generally smaller than the African apes, the largest gibbon, the siamang, weighs up to 14 kg (31 lb); in comparison, the smallest "great ape", the bonobo, is 34 to 60 kg (75 to 132 lb).

Formerly, all the great apes except humans were classified as the family Pongidae, which conveniently provided for separating the human family from the apes; see The "great apes" in Pongidae. As noted above, such a definition would make a paraphyletic grouping of the Pongidae great apes. Current evidence indicates that humans share a common ancestor with the chimpanzee line—from which they separated more recently than from the gorilla line; see Gorillas the outgroup

The superfamily Hominoidea falls within the parvorder Catarrhini, which also includes the Old World monkeys of Africa and Eurasia. Within this grouping, the two families Hylobatidae and Hominidae can be distinguished from Old World monkeys by the number of cusps on their molars; hominoids have five in the "Y-5" molar pattern, whereas Old World monkeys have only four in a bilophodont pattern.

Further, in comparison with Old World monkeys, hominoids are noted for: more mobile shoulder joints and arms due to the dorsal position of the scapula; broader ribcages that are flatter front-to-back; and a shorter, less mobile spine, with greatly reduced caudal (tail) vertebrae—resulting in complete loss of the tail in living hominoid species. These are anatomical adaptations, first, to vertical hanging and swinging locomotion (brachiation) and, later, to developing balance in a bipedal pose. Note there are primates in other families that also lack tails, and at least one, the pig-tailed langur, is known to walk significant distances bipedally. The front of the ape skull is characterised by its sinuses, fusion of the frontal bone, and by post-orbital constriction.

Although the hominoid fossil record is still incomplete and fragmentary, there is now enough evidence to provide an outline of the evolutionary history of humans. Previously, the divergence between humans and other living hominoids was thought to have occurred 15 to 20 million years ago, and several species of that time period, such as Ramapithecus, were once thought to be hominins and possible ancestors of humans. But, later fossil finds indicated that Ramapithecus was more closely related to the orangutan; and new biochemical evidence indicates that the last common ancestor of humans and non-hominins (that is, the chimpanzees) occurred between 5 and 10 million years ago, and probably nearer the lower end of that range; see Chimpanzee–human last common ancestor (CHLCA).

Although there had been earlier studies, the scientific investigation of behaviour and cognition in non-human members of the superfamily Hominoidea expanded enormously during the latter half of the twentieth century. Major studies of behaviour in the field were completed on the three better-known "great apes", for example by Jane Goodall, Dian Fossey and Birute Galdikas. These studies have shown that in their natural environments, the non-human hominoids show sharply varying social structure: gibbons are monogamous, territorial pair-bonders, orangutans are solitary, gorillas live in small troops with a single adult male leader, while chimpanzees live in larger troops with bonobos exhibiting promiscuous behaviours. Their diets also vary; gorillas are foliovores, while the others are all primarily frugivores, although the common chimpanzee does some hunting for meat. Foraging behaviour is correspondingly variable.

All the non-human hominoids are generally thought of as highly intelligent, and scientific study has broadly confirmed that they perform very well on a wide range of cognitive tests—though there is relatively little data on gibbon cognition. The early studies by Wolfgang Köhler demonstrated exceptional problem-solving abilities in chimpanzees, which Köhler attributed to insight. The use of tools has been repeatedly demonstrated; more recently, the manufacture of tools has been documented, both in the wild and in laboratory tests. Imitation is much more easily demonstrated in "great apes" than in other primate species. Almost all the studies in animal language acquisition have been done with "great apes", and though there is continuing dispute as to whether they demonstrate real language abilities, there is no doubt that they involve significant feats of learning. Chimpanzees in different parts of Africa have developed tools that are used in food acquisition, demonstrating a form of animal culture.

Cladistically, apes, catarrhines, and extinct species such as Aegyptopithecus and Parapithecidaea, are monkeys, so one can only specify ape features not present in other monkeys.

All content from Kiddle encyclopedia articles (including the article images and facts) can be freely used under Attribution-ShareAlike license, unless stated otherwise. Cite this article:
Ape Facts for Kids. Kiddle Encyclopedia.