The orangutan (Pongo) is a great ape that has fur with a color between red and brown. There are two species of orangutan. They are from Southeast Asia. There are very few of them left, because loss of the jungle has reduced their habitat. There are orangutans on view at the Singapore Zoo. 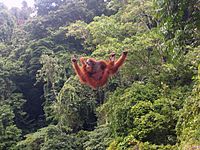 Orangutans have red-brown fur. They have long and strong arms. They also have hands that are good for climbing. The Sumatran Orangutan is smaller and has longer hair than the Bornean Orangutan. Orangutans have suffered from forest loss and are on the very edge of extinction.

Orangutans are from the rainforests on the islands Borneo and Sumatra in Southeast Asia. They mostly live up in the trees. They eat fruit, leaves and bark, but also insects, bird eggs and small vertebrate animals. They drink water from rain that has been collected in leaves. Orangutans are not comfortable on the ground since they have to push themselves along with fists. Heavy adults move carefully through the trees, using their flexible feet to grasp the tree branches. Smaller orangutans swing with more ease. 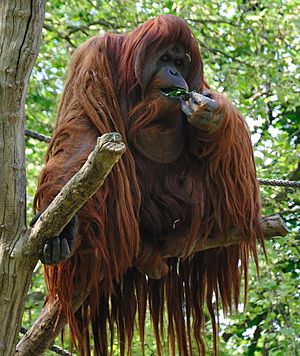 Although orangutans may consume leaves, shoots, and even bird eggs, fruit is the most important part of their diet.

An orangutan's diet consists mainly of fruit, they like ripe fruit. If they cannot find fruit they will eat bark, leaves and termites, rather than move to somewhere else to get food. About 60% of an orangutan's diet is fruit, 25% is leaves, 10% is bark and flowers, and 5% is termites and other insects. 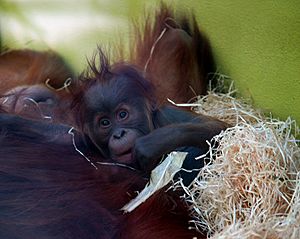 Infants cling to their mothers for the first four months.

After a pregnancy of 230–260 days the female gives birth to usually one baby, but sometimes two, every eight to nine years. The little ones stay with their mother for years, riding on their mother's back and learning to move through the forest. Like human babies, the young orangutans are playful and affectionate. When they are five or six years old, they become more independent and eventually go off on their own.

Orangutans are among the most intelligent non-human primates. Experiments suggest they can figure out some invisible displacement problems with a representational strategy. In addition, Zoo Atlanta has a touch-screen computer where their two Sumatran orangutans play games.

Tool use and culture 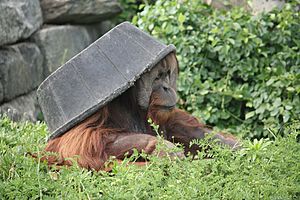 Captive orangutans may use objects in creative ways.

Tool use in orangutans was observed by primatologist Birutė Galdikas in ex-captive populations. In addition, evidence of sophisticated tool manufacture and use in the wild was reported from a population of orangutans in Suaq Balimbing in 1996. These orangutans developed a tool kit for use in foraging that consisted of both insect-extraction tools for use in the hollows of trees and seed-extraction tools for harvesting seeds from hard-husked fruit. The orangutans adjusted their tools according to the nature of the task at hand, and preference was given to oral tool use. 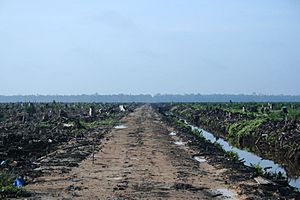 Deforestation for palm oil production in Indonesia. 80% of Indonesian logging is performed illegally due to weak law enforcement and high levels of corruption.

During the early 2000s, orangutan habitat has decreased rapidly due to logging and forest fires, as well as fragmentation by roads. A major factor in that period of time has been the conversion of vast areas of tropical forest to palm oil plantations in response to international demand. Palm oil is used for cooking, cosmetics, mechanics, and biodiesel. Hunting is also a major problem as is the illegal pet trade.

All content from Kiddle encyclopedia articles (including the article images and facts) can be freely used under Attribution-ShareAlike license, unless stated otherwise. Cite this article:
Orangutan Facts for Kids. Kiddle Encyclopedia.