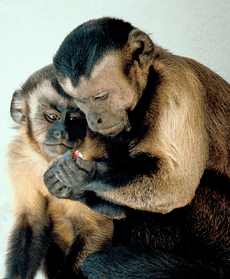 Capuchin monkeys are among the primates kept as exotic pets

A exotic pet is a rare or unusual animal which is kept as a pet. It is kept in human households but is relatively unusual or usually thought of as a wild animal rather than as a pet.

"Exotic" often refers to a species which is not native (indigenous) to where the owner lives, or an animal that isnt typically kept as a pet (unlike cats or dogs). "Pet" is a companion animal living with people.

Some animals kept as exotic pets

A wide variety of animals have been kept as pets. Below is a list of some animals that are kept in captivity at home and are thought to be "exotic". Where examples are provided within a category, the examples are the animals that are relatively commonly kept as pets in captivity at home within that category (although mice and parakeets may not really be considered very "exotic").

All content from Kiddle encyclopedia articles (including the article images and facts) can be freely used under Attribution-ShareAlike license, unless stated otherwise. Cite this article:
Exotic pet Facts for Kids. Kiddle Encyclopedia.