A hawk is a common term for a medium-sized bird of prey. Its usage varies in different places.

Accipitrine hawks generally take birds as their primary prey. They have also been called "hen-hawks", or "wood-hawks" because of their woodland habitat. Within the hawk species, the female is generally larger than the male. Like most birds, the hawk migrates in the autumn and the spring.

Hawks, like most vertebrates, have four types of colour receptors in the eye. They can see not only the visible range, but also the ultraviolet part of the spectrum. Other adaptations let them detect polarised light and magnetic fields.

They have many photoreceptors in their retina, and an exceptional number of nerves connecting the receptors to the brain. There is an indented fovea, which magnifies the central portion of the visual field. Hawks have always been known to have sharp vision and to be very able hunters.

In February 2005, Canadian ornithologist Louis Lefebvre announced a method of measuring avian "IQ" by measuring their innovation in feeding habits. Based on this scale, hawks were named among the most intelligent birds. 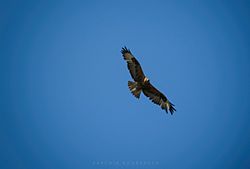 A Hawk in flight

Hawks are known to have sharp vision and to be able hunters. The female is generally larger than the male.

The red-tailed hawk is the most common hawk in North America. Past observations have indicated that while hawks can easily adapt to any surrounding, hawks prefer a habitat that is open. Hawks usually like to live in places like deserts and fields, likely as it is easier to find prey. As they are able to live anywhere, they can be found in mountainous plains and tropical, moist areas. Hawks have been found in places such as Central America, the West Indies, and Jamaica. 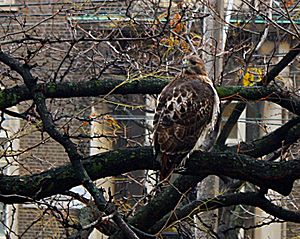 Hawk sighted in Toronto in front of the Fields Institute.

Starting in the hawk's early life, it is fed by its parents until it leaves the nest. The young hawk, while still in its fledgling phase, will leave its nest as early as six weeks old. Once the bird is older it begins to hunt. The hawk kills its prey with its claws as opposed to other predator birds, such as the falcon. The falcon uses its claws to catch the prey but kills the small animal with its mouth instead of its claws. The hawk's preferred time for hunting is usually just before nightfall when daylight lessens. Although the hawk is known for being a violent predator, some are gentle and quiet. When it flies, the hawk flaps its wings rapidly, and then uses that momentum to glide smoothly and gracefully through the air.

The idea of flocking during migration has been closely analyzed, and it has been concluded that it is a commutative tool used by birds and other animals to increase survival. It has become clear to observers that a hawk traveling in a flock have a greater chance of survival than if it travelled alone. Another word used in the United States that has the same meaning as "flock," particularly in terms of groups of hawks, is "kettle."

Hawks are known for their unique mating season. The method the hawk uses to reproduce is different from most. The male and female will fly together in a circular motion. Once they reach a certain height, the male will dive toward the female and then they will raise back to the height again. The two birds will repeat this until finally the male latches onto the female and they begin to free-fall down to earth. In one year, a female hawk will lay about five eggs. Both the male and the female will cater and take care of the eggs for about a month until they hatch. The male and the female create their nest before the mating season and improve it together during the nesting season. The two birds usually make their nest prior to mating. Some species of hawks tend to be monogamous and stay with the same mating partner their whole lives. 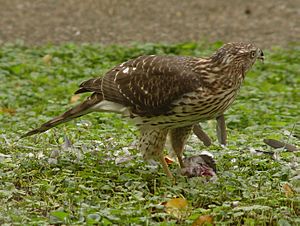 A hawk's diet is predictable and includes a variety of smaller animals. Some of these small animals include snakes, lizards, fish, mice, rabbits, squirrels, birds, and any other type of small game that is found on the ground. More specifically, a red-shouldered hawk likes to eat smaller birds like doves and bugs like grasshoppers and crickets.

All content from Kiddle encyclopedia articles (including the article images and facts) can be freely used under Attribution-ShareAlike license, unless stated otherwise. Cite this article:
Hawk Facts for Kids. Kiddle Encyclopedia.