Grasshoppers are the suborder Caelifera, including locusts. There are 11,000 species, of which 10,000 are in the family Acrididae.

To distinguish grasshoppers from bush-crickets or katydids, they are sometimes referred to as the short-horned grasshopper. Species which change colour and behaviour at high population densities are called locusts. 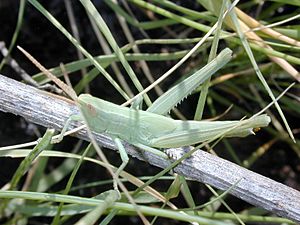 A grasshopper uses camouflage to aid its survival 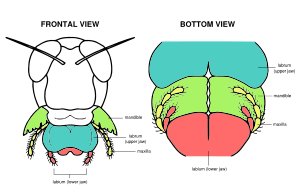 Grasshoppers have antennae that are generally shorter than their body and short ovipositors. They also have pinchers or mandibles that cut and tear off food. Those species that make easily heard noises usually do so by rubbing the hind femurs against the forewings or abdomen (stridulation), or by snapping the wings in flight. Tympana, if present, are on the sides of the first abdominal segment. The hind femora are typically long and strong, fitted for leaping. Generally they are winged, but hind wings are membranous while front wings (tegmina) are coriaceous and not fit for flight. Females are normally larger than males, with short ovipositors. Males have a single unpaired plate at the end of the abdomen. Females have two pairs of valves ( triangles) at the end of the abdomen used to dig in sand during egg laying.

They are easily confused with the other sub-order of Orthoptera, Ensifera (crickets), but are different in many aspects, such as the number of segments in their antennae and structure of the ovipositor, as well as the location of the tympana and modes of sound production. Ensiferans have antennae with at least 20-24 segments, and caeliferans have fewer. In evolutionary terms, the split between the Caelifera and the Ensifera is no more recent than the Permo-Triassic boundary. 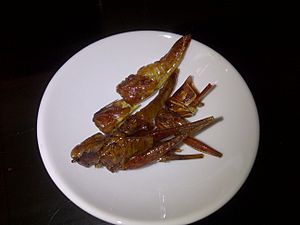 In certain countries, grasshoppers are eaten as a good source of protein. In southern Mexico for example, chapulines are regarded for their high content of protein, minerals and vitamins. They are usually collected at dusk, using lamps or electric lighting, in sweep nets. Sometimes they are placed in water for 24 hours, after which they can be boiled or eaten raw, sun-dried, fried, flavoured with spices, such as garlic, onions, chile, drenched in lime, and used in soup or as a filling for various dishes. They are abundant in Central and Southern Mexican food and street markets.

They are served on skewers in some Chinese food markets, like the Donghuamen Night Market.

Raw grasshoppers should be eaten with caution, as they may contain tapeworms.

In some countries in Africa, grasshoppers are an important food source, as are other insects, adding proteins and fats to the daily diet, especially in times of food crisis. They are often used in soup. The "grasshoppers" eaten in Uganda and neighbouring areas are called nsenene, but they are in fact bush crickets, also called katydids.

In some countries in the Middle East, grasshoppers are boiled in hot water with salt, left in the sun to dry then eaten as snacks.

Grasshoppers are also eaten in their own environment by other animals as well as by humans. They are eaten by such things as foxes, moles, birds, mice, shrews, skunks and ground squirrels. 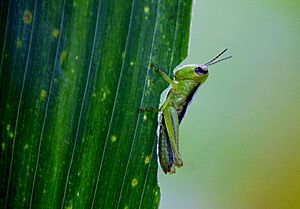 Locusts are several species of short-horned grasshoppers of the family Acrididae that sometimes form very large groups (swarms); these can be highly destructive and migrate in a more or less coordinated way. Thus, these grasshoppers have solitary and gregarious (swarm) phases. Locust swarms can cause massive damage to crops. 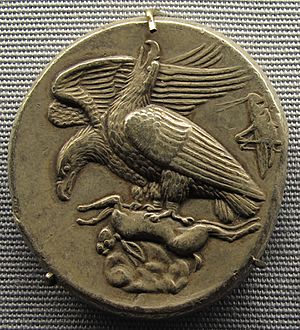 Ancient Greek tetradrachm coin from Akragas, 410 BC. A grasshopper is depicted on the right. 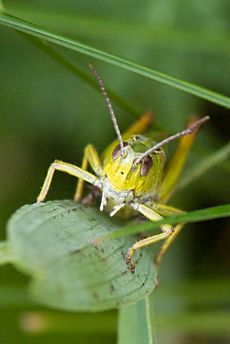 Grasshopper hidden in the grass

All content from Kiddle encyclopedia articles (including the article images and facts) can be freely used under Attribution-ShareAlike license, unless stated otherwise. Cite this article:
Grasshopper Facts for Kids. Kiddle Encyclopedia.