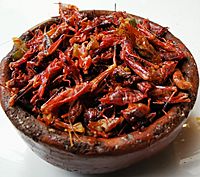 A bowl of chapulines in Oaxaca City

Chapulines, plural for chapulín, are grasshoppers of the genus Sphenarium that are commonly eaten in certain areas of Mexico. The term is specific to Mexico and Central America, and derives from the Nahuatl word chapolin (singular) or chapolimeh (plural).

They are collected only at certain times of year (from their hatching in early May through the late summer/early autumn). They are toasted on a comal. Often they are seasoned with garlic, lime juice and salt, sometimes with an extract of Maguey worms, lending a sour-spicy-salty taste to the finished product.

One of the regions of Mexico where chapulines are most widely consumed is Oaxaca, where they are sold as snacks at local sports events and are becoming revived among foodies. There is one reference to grasshoppers that are eaten in early records of the Spanish conquest, in early to mid 16th century.

Besides Oaxaca, chapulines are popular in areas surrounding Mexico City, such as Tepoztlán, Cuernavaca and Puebla. They may be eaten individually as a botana (snack) or as a filling, e.g. tlayuda filled with chapulines. The Seattle Mariners successfully introduced chapulines as a novelty snack in their 2017 home games. 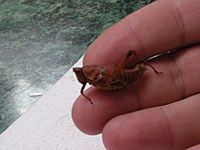 In 2007, several American media reported concerns over lead contamination in products imported from Zimatlán, a municipality in Oaxaca, including chapulines. In California, an investigation among community residents in Monterey County showed a larger risk for lead poisoning on people who either were from or reported eating food imported from Zimatlán. 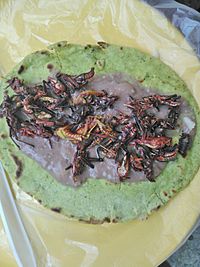 Taco made from nopal tortilla, fried beans and chapulines

Contaminated chapulines which were found for sale in California were also identified in samples from Zimatlán. Lead levels found in the chapulines were as high as 300 times the maximum recommended lead dose for children under the age of 6 and pregnant women. It was discovered the lead was from bowls used in the seasoning process. The lead problem was widely known and is no longer an issue.

All content from Kiddle encyclopedia articles (including the article images and facts) can be freely used under Attribution-ShareAlike license, unless stated otherwise. Cite this article:
Chapulines Facts for Kids. Kiddle Encyclopedia.