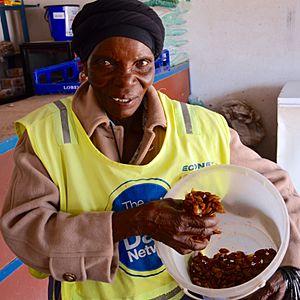 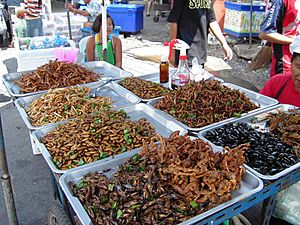 Entomophagy is a term of Ancient Greek origins, and means using insects as a source of food. It can be found in insects that eat other insects, birds, amphibians and mammals. Non-human animals that feed on insects are known as insectivores.

The term also describes human insect-eating, which can be found in parts of North, Central and South America, Africa, Asia, the Middle East, Australia and New Zealand. Insect-eating is uncommon, or even taboo in some societies.

All content from Kiddle encyclopedia articles (including the article images and facts) can be freely used under Attribution-ShareAlike license, unless stated otherwise. Cite this article:
Entomophagy Facts for Kids. Kiddle Encyclopedia.