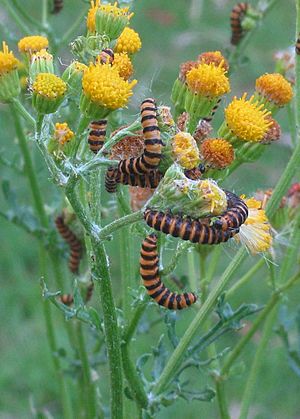 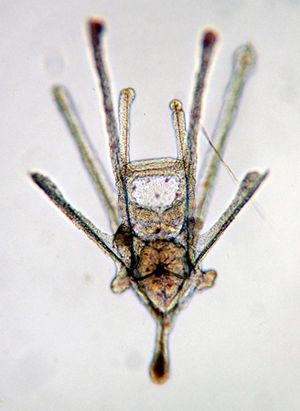 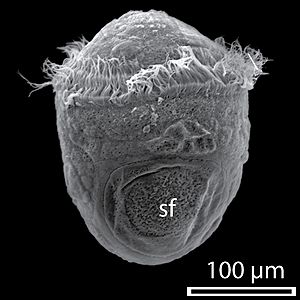 Many animals develop in separate stages. A larva (plural: larvae) develops from the egg in those animals. It is a separate life stage from the adult reproductive stage. A larva does not look like the adult animal, and changes shape (known as metamorphosis) as it grows up. There may be several larval stages before the adult form. Tadpoles, maggots and caterpillars are larvae.

Marine organisms with a larval stage often release large numbers of eggs and sperms into the water column. After fertilisation, the eggs develop into tiny larvae. The larvae develop and grow for some time before metamorphosing into adults. Most marine invertebrates and many fish have a pelagic larval stage or pelagic eggs. These live in the plankton, and may be transported long distances.

Probably the most widely accepted theory explaining the evolution of larval stages is the need for dispersal. Sessile organisms such as barnacles and tunicates, and sea-floor groups like mussels and crabs, need some way to move their young into new territory, since they cannot move long distances as adults. Many species have relatively long pelagic larval stages (how long a larva is in the water column). During this time, larvae feed and grow, and many species move through several stages of development. For example, most barnacles moult through six nauplius larva stages before moulting to a cipris, when they look to settle. The larvae eat different food from the adults, and disperse.

The other consideration is the small size of the eggs. If animals lay many small eggs (and most do), then the young stages cannot live the life the adults lead. They must live a separate life until they have the size and capability to live as an adult. This is what the larvae do.

A long-standing theory is that in transformed larvae of sea-squirts (tunicates) lies the origin of vertebrates. Tunicates are sessile, but their larvae are mobile, and have some features found in early vertebrates. The process of paedomorphosis, where juvenile features are retained in the adult, is the proposed mechanism. Genome analysis does show that the tunicates are the closest living relatives of vertebrates.

All content from Kiddle encyclopedia articles (including the article images and facts) can be freely used under Attribution-ShareAlike license, unless stated otherwise. Cite this article:
Larva Facts for Kids. Kiddle Encyclopedia.