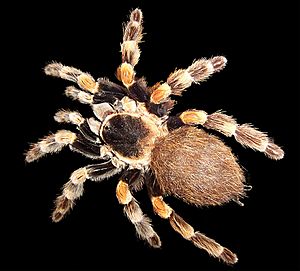 Invertebrate is a kind of animal that does not have a spinal column or backbone. It is the opposite of vertebrate, that means if an animal is not a vertebrate (fish, reptile, amphibian, bird, or mammal), it is an invertebrate.

The main phyla (groups) of invertebrate animals are:

Insects have no bones, but they have a skeleton on the outside of their bodies that scientists call an exoskeleton. It is like skin, only it is hard.

There are 18 more groups of invertebrates, mostly minor: see List of animal phyla.

All content from Kiddle encyclopedia articles (including the article images and facts) can be freely used under Attribution-ShareAlike license, unless stated otherwise. Cite this article:
Invertebrate Facts for Kids. Kiddle Encyclopedia.