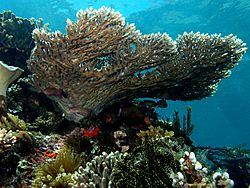 A stony coral in its natural habitat

Anthozoa are a class in the phylum Cnidaria. It includes the sea anemones and the corals. It is a monophyletic clade, one of two in the Cnidaria. The other is the Medusozoa.

The class does not have a medusa larval stage in its development, unlike the rest of the phylum. Like all Cnidaria, their food-catching and defense are done by nematocysts, which are extremely effective stinging cells. Over 6,100 species have been described.

There are three subclasses:

All content from Kiddle encyclopedia articles (including the article images and facts) can be freely used under Attribution-ShareAlike license, unless stated otherwise. Cite this article:
Anthozoa Facts for Kids. Kiddle Encyclopedia.