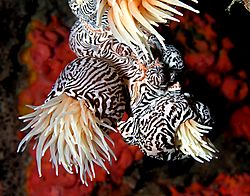 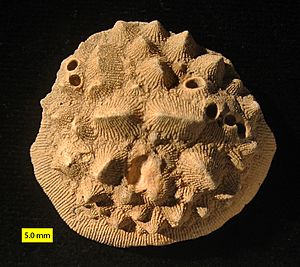 Hexacorallia is a large subclass of Anthozoa in the aquatic phylum Cnidaria.

It has about 4,300 species, all polyps, generally with 6-fold symmetry. It includes all the stony corals, most of which are colonial and reef-forming. It also contains the sea anemones, tube anemones, and zoanthids, in six living orders.

The Hexacorallia are distinguished from the other subclass of Anthozoa, the Octocorallia, because they have six or less axes of symmetry in their body structure and only single rows of tentacles. They are formed of individual soft polyps which in some species live in colonies and secrete a calcite skeleton. As with all Cnidarians, these organisms have a complex life cycle including a mobile planktonic phase and a later sessile phase.

All content from Kiddle encyclopedia articles (including the article images and facts) can be freely used under Attribution-ShareAlike license, unless stated otherwise. Cite this article:
Hexacorallia Facts for Kids. Kiddle Encyclopedia.