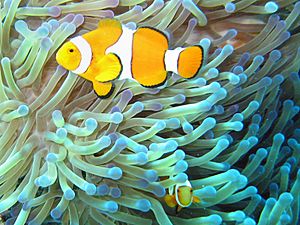 A common clownfish in a sea anemone. The fish lives in a symbiosis with the anemone 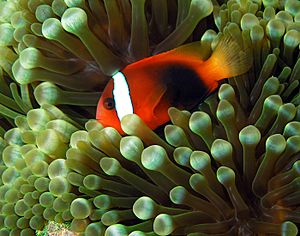 Amphiprion melanopus anemonefish in a bubble anemone from East Timor.

Sea anemones are Cnidarian animals that live in the sea. They are polyps, one of the basic forms of the phylum. They are predatory animals, which paralyse their prey with stinging nematocysts. These fire a harpoon-like structure which delivers a dose of neurotoxins. To eat the fish, or crustacean, they move the prey into their stomach, where they are slowly digested.

Anemones are sessile. This means they like to stay in one area. They can move very slowly along the bottom. Some types can swim to a new location by using flexing movements. Many species live in rockpools between high tide and low tide, and on rocky shores generally. Anemones can be found in deep oceans as well, and a few are pelagic.

Some sea anemones live in symbiosis with other animals. clownfish, Incognito goby, and arrow crabs may shelter among the tentacles of the anemone. Hermit crabs often have sea anemones on the shell they live in. Some anemones have a symbiosis with a type of algae which lives inside them. This is the same thing many corals do. The dinoflagellate algae use sunlight to make food, and the anemone uses some of the food.

The first detailed investigation of sea anemones was a survey of those found on or near the beaches of the British Isles by the naturalist Philip Henry Gosse.

All content from Kiddle encyclopedia articles (including the article images and facts) can be freely used under Attribution-ShareAlike license, unless stated otherwise. Cite this article:
Sea anemone Facts for Kids. Kiddle Encyclopedia.