The hermit crab is a type of crab that does not have a hard shell. They use old shells for protection. They especially like old whelk shells. When the hermit crab grows in size, it finds a larger shell. 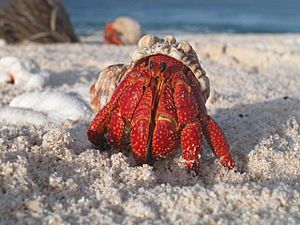 A hermit crab emerges from its shell

The hermit crab is a crustacean, but it is very different from other crustaceans. While most crustaceans are covered from head to tail with a hard exoskeleton, the hermit crab is missing part of its exoskeleton. The back part where its abdomen is located, is soft and squishy. Thus, the minute a hermit crab molts into an adult, it sets out to find a shell in which to live.

To get into the shell, the hermit crab squeezes in backwards, securing itself with its four back legs. The back legs have hooks that anchor the hermit crab into the shell without difficulty. The next four legs are used for walking, while the front two are its chelipeds. The chelipeds are not equal in size: one is big and other is small. The larger one is used for grabbing prey and guarding the entrance to its shell. All together, hermit crabs have a total of ten legs, including the chelipeds and the rear legs used to anchor to the shell.

There are about 500 different species of hermit crabs around the world, and they have different colors, often with patterns like stripes and dots on their bodies. Most hermit crab species live on the ocean floor, but many live on land. Female terrestrial (land based) hermit crabs must return to the sea to breed.

Hermit crabs are omnivores (eating plants and animals) and scavengers (eating dead animals that they find). They eat worms, plankton, and organic debris. 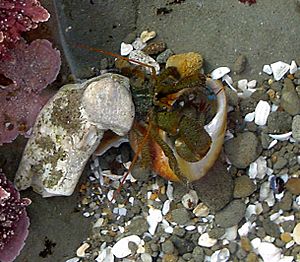 Hermit crabs fighting over a shell 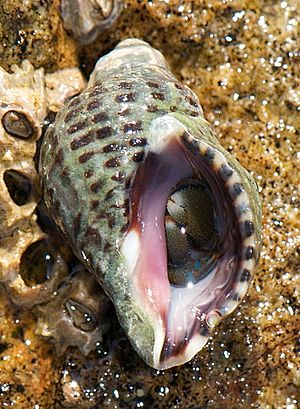 Since suitable intact gastropod shells are sometimes a limited resource, vigorous competition often occurs among hermit crabs for shells. The availability of empty shells at any given place depends on the relative abundance of gastropods and hermit crabs, matched for size. An equally important issue is the population of organisms that prey upon gastropods and leave the shells intact.

Hermit crabs kept together may fight or kill a competitor to gain access to the shell they favour. However, if the crabs vary significantly in size, the occurrence of fights over empty shells will decrease or remain nonexistent. Hermit crabs with too-small shells cannot grow as fast as those with well-fitting shells, and are more likely to be eaten if they cannot retract completely into the shell.

As the hermit crab grows in size, it must find a larger shell and abandon the previous one. This habit of living in a second-hand shell gives rise to the popular name "hermit crab", by analogy to a hermit who lives alone. Several hermit crab species, both terrestrial and marine, have been observed forming a vacancy chain to exchange shells. When an individual crab finds a new empty shell it will leave its own shell and inspect the vacant shell for size. If the shell is found to be too large, the crab goes back to its own shell and then waits by the vacant shell for anything up to 8 hours. As new crabs arrive they also inspect the shell and, if it is too big, wait with the others, forming a group of up to 20 individuals, holding onto each other in a line from the largest to the smallest crab. As soon as a crab arrives that is the right size for the vacant shell and claims it, leaving its old shell vacant, then all the crabs in the queue swiftly exchange shells in sequence, each one moving up to the next size.

Hermit crabs often "gang up" on one of their species with what they perceive to be a better shell, and pry its shell away from it before competing for it until one takes it over. For some larger marine species, supporting one or more sea anemones on the shell can scare away predators. The sea anemone benefits, because it is in position to consume fragments of the hermit crab's meals. Other very close symbiotic relationships are known from encrusting bryozoans and hermit crabs forming bryoliths.

When properly sized gastropod shells are not available, hermit crabs have been known to resort to wearing other objects such as tree nut hulls or pieces of beach litter rather than go unprotected. This has become very common in some areas, due not only to the increased prevalence of marine debris, but also due to depletion of seashells from beaches due to humans collecting them.

The reproductive organs of hermit crabs are located near and just below the animal's heart and open to the outside at the base of the last pair of walking legs in the male. In the female, they are located at the base of the middle pair of walking legs. Female hermit crabs usually lay their eggs shortly after mating, but they can also store sperm for many months. The eggs are fertilised as they are laid by passing through the chamber holding the sperm. The eggs are carried and hatched in a mass attached to the abdomen inside the shell. The number of eggs is usually large, but depends on the animal's size. 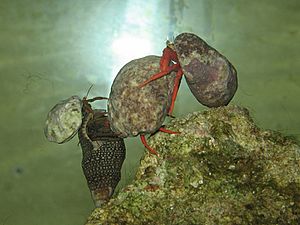 Four hermit crabs in an aquarium

All content from Kiddle encyclopedia articles (including the article images and facts) can be freely used under Attribution-ShareAlike license, unless stated otherwise. Cite this article:
Hermit crab Facts for Kids. Kiddle Encyclopedia.