The Malacostraca (Greek: "soft shell") are the largest subgroup of crustaceans. They include decapods (such as crabs, lobsters and shrimp), stomatopods (mantis shrimp) and krill. There are 22,000 members in this group. It represents two thirds of all crustacean species. The first malacostracans appeared in the Cambrian period.

The classification of crustaceans is currently being debated. Some think Malacostraca is a class and others think it is a subclass. 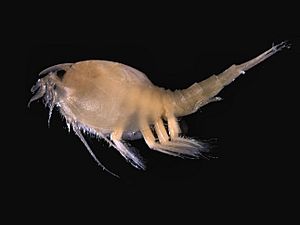 The class Malacostraca includes about 40,000 species, and "arguably ... contains a greater diversity of body forms than any other class in the animal kingdom". Its members are characterised by the presence of three tagmata (specialized groupings of multiple segments) – a five-segmented head, an eight-segmented thorax and an abdomen with six segments and a telson, except in the Leptostraca, which retain the ancestral condition of seven abdominal segments. Malacostracans have abdominal appendages, a fact that differentiates them from all other major crustacean taxa except Remipedia. Each body segment bears a pair of jointed appendages, although these may be lost secondarily.

The head bears two pairs of antennae, the first of which is often biramous (branching into two parts) and the second pair bear exopods (outer branches) which are often flattened into antennal scales known as scaphocerites. The mouthparts consist of pairs each of mandibles, maxillules (second pair of mouthparts) and maxillae. Usually a pair of stalked compound eyes is present, although in some taxa the eyes are unstalked, reduced or lost.

Up to three thoracic segments may be fused with the head to form a cephalothorax; the associated appendages turn forward and are modified as maxillipeds (accessory mouthparts). A carapace may be absent, present or secondarily lost, and may cover the head, part or all of the thorax and some of the abdomen. It is variable in form and may be fused dorsally with some of the thoracic segments or occasionally be in two parts, hinged dorsally. Typically, each of the thoracic appendages is biramous and the endopods are the better developed of the branches, being used for crawling or grasping. Each endopod consist of seven articulating segments; the coxa, basis, ischium, merus, carpus, propodus and dactylus. In decapods, the claw is formed by the articulation of the dactylus against an outgrowth of the propodus. In some taxa, the exopods are lost and the appendages are uniramous.

There is a clear demarcation between the thorax and the six or seven-segmented abdomen. In most taxa, each abdominal segment except the last carries a pair of biramous pleopods used for swimming, burrowing, gas exchange, creating a current or brooding eggs. The first and second abdominal pleopods may be modified in the male to form gonopods (accessory copulatory appendages). The appendages of the last segment are typically flattened into uropods, which together with the terminal telson, make up the "tail fan". It is the sudden flexion of this tail fan that provides the thrust for the rapid escape response of these crustaceans and the tail fan is also used in steering. In Leptostraca, the appendages on the telson instead form caudal rami (spine-like protrusions).

The digestive tract is straight and the foregut consists of a short oesophagus and a two-chambered stomach, the first part of which contains a gizzard-like "gastric mill" for grinding food. The walls of this have chitinous ridges, teeth and calcareous ossicles. The fine particles and soluble material are then moved into the midgut where chemical processing and absorption takes place in one or more pairs of large digestive caeca. The hindgut is concerned with water reclamation and the formation of faeces and the anus is situated at the base of the telson.

Like other crustaceans, malacostracans have an open circulatory system in which the heart pumps blood into the hemocoel (body cavity) where it supplies the needs of the organs for oxygen and nutrients before diffusing back to the heart. The typical respiratory pigment in malacostracans is haemocyanin. Structures that function as kidneys are located near the base of the antennae. A brain exists in the form of ganglia close to the antennae, there are ganglia in each segment and a collection of major ganglia below the oesophagus. Sensory organs include compound eyes (often stalked), ocelli (simple eyes), statocysts and sensory bristles. The naupliar eye is a characteristic of the nauplius larva and consists of four cup-shaped ocelli facing in different directions and able to distinguish between light and darkness. 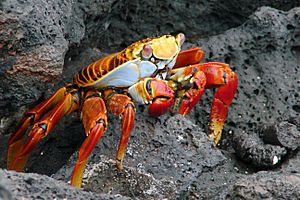 Malacostracans live in a wide range of marine and freshwater habitats, and three orders have terrestrial members: Amphipoda (Talitridae), Isopoda (Oniscidea, the woodlice) and Decapoda (terrestrial hermit crabs, crabs of the families Ocypodidae, Gecarcinidae, and Grapsidae, and terrestrial crayfish). They are abundant in all marine ecosystems, and most species are scavengers, although some, such as the porcelain crabs, are filter feeders, and some, such as mantis shrimps, are carnivores.

Most species of malacostracans have distinct sexes (a phenomenon known as gonochorism), although a few species exhibit hermaphroditism. The female genital openings or gonopores are located on the sixth thoracic segment or its appendages, while the male gonopores are on the eighth segment or its appendages, or in a small number of species, on the seventh. The naupliar larval stages are often reduced and take place before hatching, but where they occur, a metamorphosis usually occurs between the larval and the adult forms. Primitive malacostracans have a free-swimming naupliar larval stage.

All content from Kiddle encyclopedia articles (including the article images and facts) can be freely used under Attribution-ShareAlike license, unless stated otherwise. Cite this article:
Malacostraca Facts for Kids. Kiddle Encyclopedia.