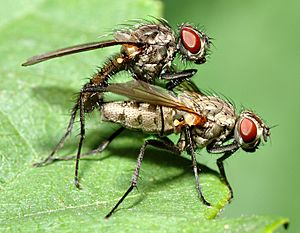 Arthropods (such as flies) are the most abundant terrestrial animals by species count.

A terrestrial animal is an animal that lives on land such as dog, cat, an ant or an emu. It can also be used for some species of amphibians that only go back to the water to lay their eggs. It is usually a term to describe the difference between animals that live in water, (such as lobsters and fish), from animals that live on land.

All content from Kiddle encyclopedia articles (including the article images and facts) can be freely used under Attribution-ShareAlike license, unless stated otherwise. Cite this article:
Terrestrial animal Facts for Kids. Kiddle Encyclopedia.