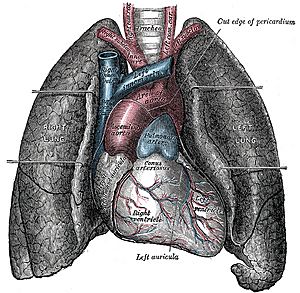 The lung is an organ in many vertebrates (animals having a spine, or backbone). It gives blood oxygen from the air, and takes away carbon dioxide. Most vertebrates have 2 lungs.

In animals, the lungs are the area where gas exchange takes place. Without gas exchange, oxygen would not pass into the blood from the lungs so the body cells would not be able to receive the oxygen needed for respiration.

Birds lungs do not have alveoli, instead they have millions of para-bronchi. These para-bronchi end up in tiny capillaries or very small blood vessels and they pass close to the body's blood vessels, so diffusion can occur and the oxygen and carbon dioxide is exchanged. The oxygen and carbon dioxide in birds lungs are continuously diffused into and out of the blood, not like in mammals where diffusion can only happen in the alveoli.

Frog lungs are very simple compared to most other lungs, they are simply balloons, with moist outsides allowing for diffusion. But frogs do not move around much and so do not need lots of oxygen, but they can also take in oxygen through their moist outer skin if a big demand of oxygen is needed (e.g. Fight or Flight).

All content from Kiddle encyclopedia articles (including the article images and facts) can be freely used under Attribution-ShareAlike license, unless stated otherwise. Cite this article:
Lung Facts for Kids. Kiddle Encyclopedia.