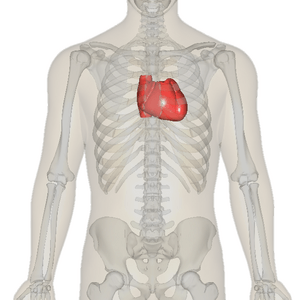 The human heart is in the middle of the thorax, with its apex pointing to the left.

The heart is a muscle found in every animal that has a vertebral column. It is a very strong muscle that is about the size of a fist. It pumps blood throughout the body. It has regular contractions, or when the heart squeezes the blood out into other parts of the body.

Cardiac and cardio both mean "about the heart", so if something has the prefix cardio or cardiac, it has something to do with the heart.

The human heart has four chambers or closed spaces. Some animals have only two or three chambers. 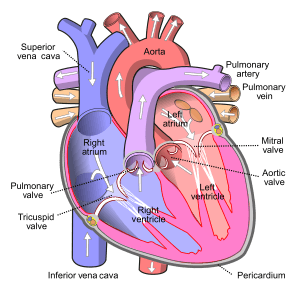 In humans, the four chambers are two atria and two ventricles. Atria is talking about two chambers; atrium is talking about one chamber. There is a right atrium and right ventricle. These get blood that comes to the heart. They pump this blood to the lungs. In the lungs blood picks up oxygen and drops carbon dioxide. Blood from the lungs goes to the left atrium and ventricle. The left atrium and ventricle send the blood out to the body. The left ventricle works six times harder than the right ventricle because it carries oxygenated blood..

The four valves of the heart are:

Blood flow through the heart valves

A heart beat is when the heart muscle contracts. This means the heart pushes in and this makes the chambers smaller. This pushes blood out of the heart and into the blood vessels. After the heart contracts and pushes in, the muscle relaxes or stops pushing in. The chambers get bigger and blood coming back to the heart fills them.

The order is: atrial systole → ventricular systole → cardiac diastole. When this happens one time, it is called a cardiac cycle.

Systole (when the heart squeezes) happens because the muscle cells of the heart gets smaller in size. When they get smaller we also say they contract. Electricity going through the heart makes the cells contract. The electricity starts in the sino-atrial node (acronym SA Node) The SA Node is a group of cells in the right atria. These cells start an electrical impulse. This electrical impulse sets the rate and timing at which all cardiac muscle cells contract. This motion is called 'atrial systole'. Once electrical impulse goes through the atrio-ventricular node (AV Node). The AV Node makes the impulse slow down. Slowing down makes the electrical impulses get to the ventricles later. That is what makes the ventricular systole occur after atrial systole, and lets all the blood leave the atria before ventricle contracts (meaning squeeze).

ECG is an acronym for ElectroCardioGram. It is also written EKG for ElectroKardioGram in German. The ECG shows what the electricity in the heart is doing. An ECG is done by putting electrodes on a person's skin. The electrodes see the electricity going through the heart. This is written on paper by a machine. This writing on the paper is the ECG.

Doctors learn about the person's heart by looking at the ECG. The ECG shows some diseases of the heart like heart attacks or problems with the rhythm of the heart (how the electricity goes through the heart's conduction system.) 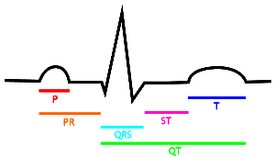 ECG "Rhythm Strip" - Each QRS is one heart beat

All content from Kiddle encyclopedia articles (including the article images and facts) can be freely used under Attribution-ShareAlike license, unless stated otherwise. Cite this article:
Heart Facts for Kids. Kiddle Encyclopedia.