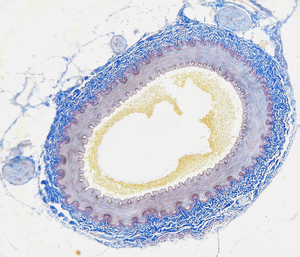 Cross-section of a human artery

An artery is a blood vessel that carries blood away from the heart to other parts of the body. Almost all arteries carry blood with a lot of oxygen in it. The only arteries that do not carry oxygen-rich blood are the pulmonary artery, and (in a fetus) the umbilical artery.

Every artery has three layers. The outer layer is a thick covering made of stretchy tissue. The middle layer is made of muscle, so the artery can get wider or get smaller when the body needs it to. The inner lining is made of the same cells that line the heart.

Arteries are deep under the skin. They do not have valves to prevent blood from flowing backwards. Instead, every time the heart beats, the arteries stretch out so the blood has room to go through. Once the walls have completely stretched out, the muscles in the arteries make them shrink back to their normal size. This pushes the blood through. 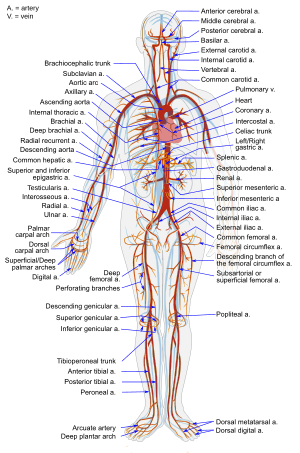 The body's major arteries. Notice how they all branch off of the aorta.

The aorta is the main artery in the human body. It starts in the left ventricle of the heart, which is full of blood that just picked up oxygen in the lungs. (This is called oxygenated blood - meaning it has a lot of oxygen in it.) The left ventricle pumps this oxygen-rich blood out through the aorta. The aorta brings this blood to every organ in the body.

The aorta runs all the way from the heart to the bottom of the abdomen. Along the way, smaller arteries split off the aorta, like branches on a tree, to bring blood to different parts of the body. The aorta finally ends by splitting off into the two arteries that bring blood to the legs.

Except for the pulmonary artery, every artery in the body is connected to the aorta. Some other important arteries include:

The pulmonary artery is the only artery in the adult body that:

The body uses the oxygen carried in the other arteries to make energy. The blood in these arteries becomes deoxygenated - it does not have much oxygen left in it. This blood then travels through capillaries to get from the arteries to the veins. The veins' job is to carry the deoxygenated blood back to the right side of the heart. The pulmonary artery carries this blood from the heart's right ventricle to the lungs. In the lungs, the blood can pick up more oxygen.

After picking up more oxygen, the blood travels back to the left side of the heart and is pumped out to the body by the aorta. This cycle continues, over and over again.

Because the heart pumps blood right into the arteries, the arteries are under a lot of pressure. Unlike the veins, the arteries are always stretching and then squeezing to push blood through them to the body. Because of this, an arterial bleed - bleeding from an artery - can be a medical emergency, especially if the artery is big. Arterial bleeding can happen very quickly. For example, if a person's femoral artery is cut, they can bleed to death.

If an artery in the brain starts bleeding, the bleeding can cause a stroke. 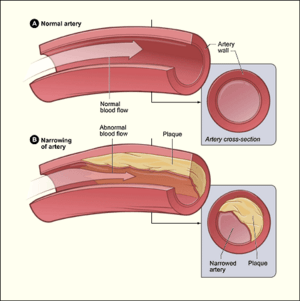 Diagram showing the effects of atherosclerosis on an artery.

When a person has arteriosclerosis, the walls of their arteries get harder, stiffer, and less stretchy. This makes it more difficult for blood and oxygen to get through the arteries to the body's important organs.

When atherosclerosis happens in the coronary arteries, it can cause coronary heart disease. If these arteries get too clogged, the heart will not get the blood and oxygen it needs to survive. This can cause angina, a heart attack, heart failure, or even sudden death.

When atherosclerosis happens in one of the arteries in the brain, it can cause a stroke.

All content from Kiddle encyclopedia articles (including the article images and facts) can be freely used under Attribution-ShareAlike license, unless stated otherwise. Cite this article:
Artery Facts for Kids. Kiddle Encyclopedia.