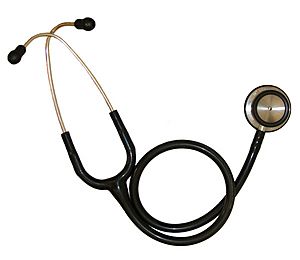 A stethoscope is a instrument used by doctors and other medical people. It is used to measure peoples heartbeat and their breathing. It is placed on the area where the heart is or on the back.

The modern stethoscope is made up of a Y-shaped flexible plastic tube. An earpiece is attached to each end of the Y and a sound-detecting device at the other end. The sound-detecting device has a thin plastic sheet on one side and a bell shape with a hole in on the other. The diaphragm is used to listen to a patient's chest for high-pitched sounds. The bell end is used to detect lower-pitched sounds. The lung sounds have a higher frequency than heart sounds.

All content from Kiddle encyclopedia articles (including the article images and facts) can be freely used under Attribution-ShareAlike license, unless stated otherwise. Cite this article:
Stethoscope Facts for Kids. Kiddle Encyclopedia.