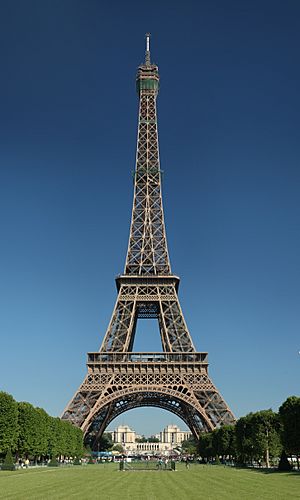 Paris (nicknamed the "City of light") is the capital city of France, and the largest city in France. The area is 105 square kilometres (41 square miles), and around 2.15 million people live there. If suburbs are counted, the population of the Paris area rises to 12 million people.

The Seine river runs through the oldest part of Paris, and divides it into two parts, known as the Left Bank and the Right Bank. It is surrounded by many forests.

Paris is also the center of French economy, politics, traffic and culture. Paris has many art museums and historical buildings. As a traffic center, Paris has a very good underground subway system (called the Metro). It also has two airports. The Metro was built in 1900, and its total length is more than 200 km (120 mi).

The city has a multi-cultural style, because 20% of the people there are from outside France. There are many different restaurants with all kinds of food. Paris also has some types of pollution like air pollution and light pollution.

Julius Caesar conquered the Celtic "Parisii" tribe in 51 BC. The Romans called the place Lutetia of the Parisii, or "Lutetia Parisiorum". The place got a shorter name, "Paris", in 212 AD.

As the Roman Empire began to fall apart in the West, the Germanic tribe called the Franks moved in, taking it in 464. In 506, their king Clovis I made it his capital. Charlemagne moved his capital to Aachen in Germany, but Paris continued as an important town and was attacked by the Vikings twice. When Hugh Capet became king of France in 987, he again made Paris his capital. For a long time, the kings only controlled Paris and the surrounding area, as much of the rest of France was in the hands of barons or English. During the Hundred Years' War, the English controlled Paris from 1420 to 1437.

During the Protestant Reformation, a huge massacre of French Protestants started there in 1572, called the Saint Bartholomew Day Massacre. Paris saw many other troubles over the years of the "Ancien Régime" (Old Kingdom), then in 1789, the French Revolution began in Paris, leading to more massacres.

Paris was the Capital of the French Empire which, as well as France, covered Spain, Belgium, Holland, Luxembourg, Switzerland, Italy, most of Germany and some of Austria, Croatia, Slovenia and Poland. The Empire ruled by Napoleon was from 1804-1814/1815. The Russian army seized Paris from Napoleon in 1814, and the Prussian army captured it in 1871. The next time it was captured was by the Nazi Germans in 1940. The Allies freed the city in 1944 and it has not since been captured. 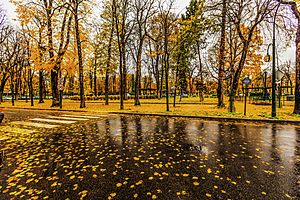 Paris has a temperate oceanic climate. It has warm summers and cool winters. It has moderate rainfall year-round. 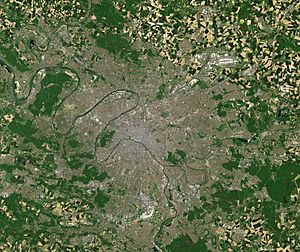 Satellite image of Paris by Sentinel-2 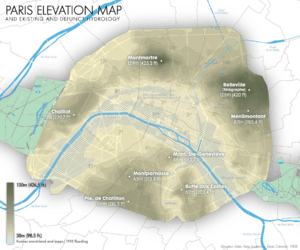 Paris is located in northern central France, in a north-bending arc of the river Seine whose crest includes two islands, the Île Saint-Louis and the larger Île de la Cité, which form the oldest part of the city. The river's mouth on the English Channel (La Manche) is about 233 mi (375 km) downstream from the city. The city is spread widely on both banks of the river. Overall, the city is relatively flat, and the lowest point is 35 m (115 ft) above sea level. Paris has several prominent hills, the highest of which is Montmartre at 130 m (427 ft).

Excluding the outlying parks of Bois de Boulogne and Bois de Vincennes, Paris covers an oval measuring about 87 km2 (34 sq mi) in area, enclosed by the 35 km (22 mi) ring road, the Boulevard Périphérique. The city's last major annexation of outlying territories in 1860 not only gave it its modern form but also created the 20 clockwise-spiralling arrondissements (municipal boroughs). From the 1860 area of 78 km2 (30 sq mi), the city limits were expanded marginally to 86.9 km2 (33.6 sq mi) in the 1920s. In 1929, the Bois de Boulogne and Bois de Vincennes forest parks were officially annexed to the city, bringing its area to about 105 km2 (41 sq mi). The metropolitan area of the city is 2,300 km2 (890 sq mi).

Panorama of Paris as seen from the Eiffel Tower in a full 360-degree view (river flowing from north-east to south-west, right to left) 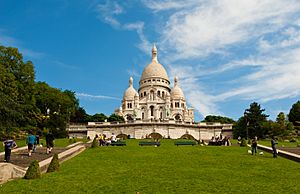 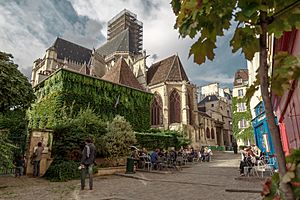 Most French rulers since the Middle Ages made a point of leaving their mark on a city that, contrary to many other of the world's capitals, has never been destroyed by catastrophe or war. In modernising its infrastructure through the centuries, Paris has preserved even its earliest history in its street map. At its origin, before the Middle Ages, the city was composed around several islands and sandbanks in a bend of the Seine; of those, two remain today: the Île Saint-Louis and the Île de la Cité. A third one is the 1827 artificially created Île aux Cygnes. 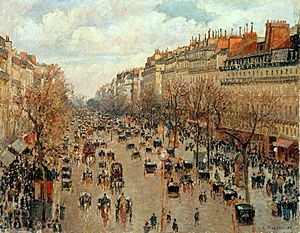 Modern Paris owes much of its downtown plan and architectural harmony to Napoleon III and his Prefect of the Seine, Baron Haussmann. Between 1853 and 1870 they rebuilt the city centre, created the wide downtown boulevards and squares where the boulevards intersected, imposed standard facades along the boulevards, and required that the facades be built of the distinctive cream-grey "Paris stone". They also built the major parks around the city centre. The high residential population of its city centre also makes it much different from most other western major cities. 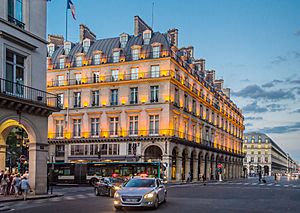 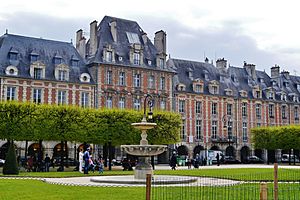 Paris' urbanism laws have been under strict control since the early 17th century, particularly where street-front alignment, building height and building distribution is concerned. In recent developments, a 1974–2010 building height limitation of 37 metres (121 ft) was raised to 50 m (160 ft) in central areas and 180 metres (590 ft) in some of Paris' peripheral quarters, yet for some of the city's more central quarters, even older building-height laws still remain in effect. The 210 metres (690 ft) Tour Montparnasse was both Paris's and France's tallest building until 1973, but this record has been held by the La Défense quarter Tour First tower in Courbevoie since its 2011 construction.

Parisian examples of European architecture date back more than a millennium, including the Romanesque church of the Abbey of Saint-Germain-des-Prés (1014–1163), the early Gothic Architecture of the Basilica of Saint-Denis (1144), the Notre Dame Cathedral (1163–1345), the Flamboyant Gothic of Saint Chapelle (1239–1248), the Baroque churches of Saint-Paul-Saint-Louis (1627–1641) and Les Invalides (1670–1708). The 19th century produced the neoclassical church of La Madeleine (1808–1842), the Palais Garnier serving as an opera house (1875), the neo-Byzantine Basilica of Sacré-Cœur (1875–1919), as well as the exuberant Belle Époque modernism of the Eiffel Tower (1889). Striking examples of 20th-century architecture include the Centre Georges Pompidou by Richard Rogers and Renzo Piano (1977), the Cité des Sciences et de l'Industrie by various architects (1986), the Arab World Institute by Jean Nouvel (1987), the Louvre Pyramid by I. M. Pei (1989) and the Opéra Bastille by Carlos Ott (1989). Contemporary architecture includes the Musée du quai Branly – Jacques Chirac by Jean Nouvel (2006), the contemporary art museum of the Louis Vuitton Foundation by Frank Gehry (2014) and the new Tribunal de grande instance de Paris by Renzo Piano (2018). 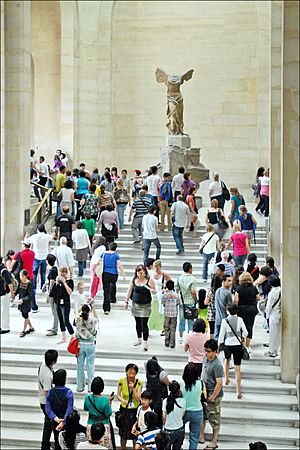 Tourists from around the world make the Louvre the most-visited art museum in the world. 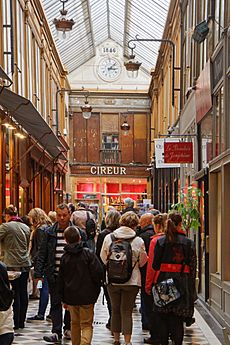 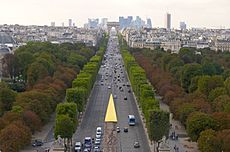 The Axe historique, pictured here from Concorde to Grande Arche of La Défense 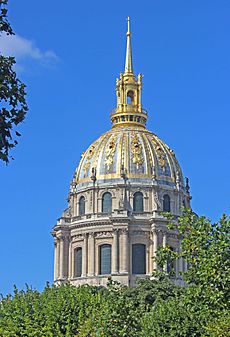 Paris has much to offer for sightseeing. Here are five very famous examples:

Because the city of Paris is roughly only 6 miles across, visitors have a wide range of options when it comes to transportation. While much of the more well-known attractions are in the center of the city and are best experienced by walking, there are many destinations that require other means of transport. While taxis offer a fast and relatively inexpensive means of travel, Paris’ public transportation system offers an enjoyable, stress-free way to explore the city.

The Paris Métro system was built in 1900 by engineer Fulgence Bienvenüe and architect Hector Guimard. The Métro covers over 124 miles with 300 stations and 16 lines. Servicing over 6 million residents and tourists every day, the Métro was designed to be an efficient and reliable alternative to the congestion of traffic. Every building in Paris is less than 500 meters from a train station, so accessibility is never a problem. The 16 Métro lines are identified by their final destinations. A rider can simply select the appropriate line and take it in the direction s/he wants. The Métro stations are well marked, and there are ticket booths at most entrances.

All content from Kiddle encyclopedia articles (including the article images and facts) can be freely used under Attribution-ShareAlike license, unless stated otherwise. Cite this article:
Paris Facts for Kids. Kiddle Encyclopedia.