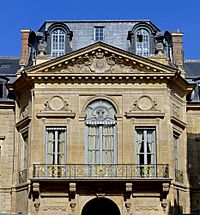 Part of the Palais Royal today.

Entrance front of the Palais-Royal on the rue Saint-Honoré 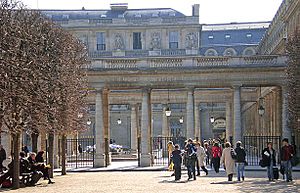 Garden-side view with the columns of the former Galerie d'Orléans

The Palais Royal is a building in Paris. It was once a palace of the French royal family. It was built in the 1630s by Cardinal Richelieu to hold his art collection. When Richelieu died in 1642, it became the property of the young King Louis XIV.

From 1649, the exiled Henrietta Maria of France and her daughter Henrietta lived here. The two had escaped England during the English Civil War. They were sheltered here by King Louis XIV, who was Henrietta Maria's nephew.

In 1692, when the Duke of Chartres married Françoise Marie de Bourbon, the King gave the Palais-Royal to his brother, Philippe, Duke of Orléans.

Louis Philippe I, future King of the French, was born here. He was the son of the young Philippe Égalité and his wife Louise Marie Adélaïde de Bourbon.

The future Louis Philippe I was also born here.

All content from Kiddle encyclopedia articles (including the article images and facts) can be freely used under Attribution-ShareAlike license, unless stated otherwise. Cite this article:
Palais-Royal Facts for Kids. Kiddle Encyclopedia.