Louis Philippe I facts for kids

Louis Philippe I (6 October 1773 – 26 August 1850) was the first and only person to have the title King of the French. Following the execution of Louis XVI and Marie Antoinette, France became a republic. He spent 21 years in exile before being made king after the death of Charles X of France in 1830. His relatively short reign (1830–1848) was known as the July Monarchy. Louis-Philippe promoted friendship with Great Britain. He sponsored colonialism, notably the conquest of Algeria. His popularity faded quickly when French troops fired on demonstrators. This set off the French Revolution of 1848 causing Louis Philippe to flee England as "Mr. Smith". He lived out his life in exile in England. His eldest son and heir died before succeeding him. This brought the Kingdom of the French to an end. 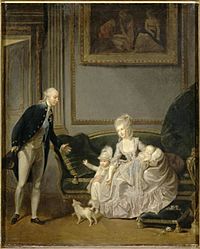 The Duke and Duchess of Chartres with an enfant Louis Philippe (1837 copy of 1776 original).

Born at the Palais Royal in Paris he was named Louis Philippe d'Orléans, Louis Philippe in honour of his father. His parents were the Duke and Duchess of Orléans. One of the most senior members of the French royal court. He was born a Prince of the blood which entitled him to be addressed as His Serene Highness. From birth he was given the title of Duke of Valois one of his fathers subsidiary titles. He was the eldest of four children born to the duke and duchess. He was a member of the House of Orléans, itself a cadet branch of the ruling House of Bourbon. The two branches were both directly descended from Louis XIV and were often in competition with one another.

His parents had a strained marriage the Duke was famous for his many extramarital affairs and his wife just quietly accepted his infidelity. She was a notoriously religious woman who relished watching her children grow up. Louis Philippe was the eldest of four children born to the couple. Louis Philippe was very close to his brother, the younger Duke of Montpensier.

In 1792 he joined the French army and went to fight in Austria. But in April 1793 he deserted. He could not return to France so he found work as a teacher in Switzerland. He then went to live in Sweden. After that he lived in the United States and finally he moved to England.

After the abdication of Napoleon in 1814, Louis Philippe returned to France. King Louis XVIII gave him back his Orléans estates. 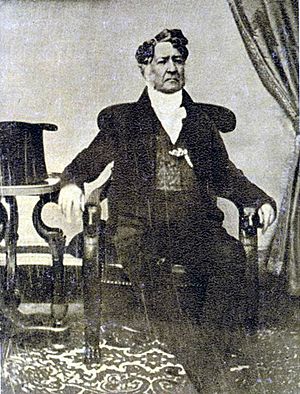 In 1808, proposed to Princess Elizabeth, daughter of King George III of the United Kingdom. His Catholicism and the opposition of her mother Queen Charlotte meant the princess reluctantly declined the offer.

In 1809, Louis Philippe married Princess Maria Amalia of Naples and Sicily, daughter of King Ferdinand IV of Naples and Maria Carolina of Austria. They had ten children. Maria Amalia was also a niece of the late Queen Marie Antoinette.

When king of the French he made his children and descendants legally able to bare the title of Prince/ss of Orléans. With the style of Royal Highness. 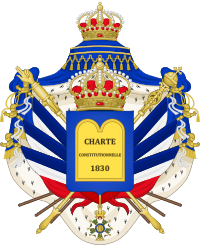 All content from Kiddle encyclopedia articles (including the article images and facts) can be freely used under Attribution-ShareAlike license, unless stated otherwise. Cite this article:
Louis Philippe I Facts for Kids. Kiddle Encyclopedia.