French Revolution of 1848 facts for kids 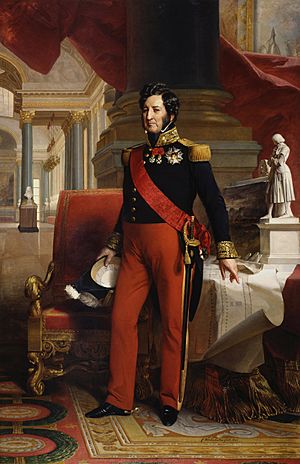 Louis-Philippe I, the last King of the French

The February 1848 Revolution in France ended the reign of King Louis-Philippe, and led to the creation of the French Second Republic (1848-1852).

The revolution established the principle of the "right to work" (droit au travail), and decided to establish "National Workshops" for the unemployed. At the same time a sort of industrial parliament was established at the Luxembourg Palace, under the presidency of Louis Blanc. Tensions between liberal Orleanist and Radical Republicans and Socialists would cause the June Days Uprising a few months later.

Meanwhile the revolution inspired other European Revolutions of 1848.

The End of the Revolution in France

The era of revolution in France came to an end when Louis Napoleon dissolved the National Assembly without having the constitutional right to do so, and became the sole ruler of France. In 1852 he reestablished the empire and took the title Emperors Napoleon III.

All content from Kiddle encyclopedia articles (including the article images and facts) can be freely used under Attribution-ShareAlike license, unless stated otherwise. Cite this article:
French Revolution of 1848 Facts for Kids. Kiddle Encyclopedia.