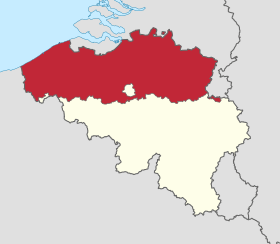 Flemish Region (Dutch: Vlaams Gewest) is a region in the north of Belgium. The official language is Dutch, sometimes called Flemish. Flanders has 5 provinces. About 7 million people live there. Its capital is Brussels.

Flanders is one of three regions in Belgium. The other two regions are Wallonia (or Walloon Region) and Brussels-Capital Region.

All content from Kiddle encyclopedia articles (including the article images and facts) can be freely used under Attribution-ShareAlike license, unless stated otherwise. Cite this article:
Flemish Region Facts for Kids. Kiddle Encyclopedia.