The flag of Wallonia

The coat of arms of Wallonia 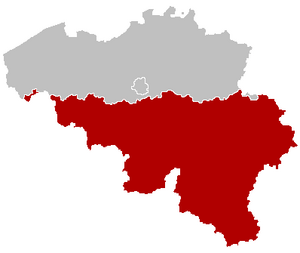 Wallonia (red) and the rest of Belgium (gray)

Wallonia (French: Wallonie, Walloon: Waloneye or Walonreye) or the Walloon Region (French: Région wallonne) is a French-speaking region in the south of Belgium. Its official languages are French (98%) and German (2%). Many people understand the local language Walloon, some still speak it, and few people write it. German is spoken mainly in the area of the German-speaking Community of Belgium.

The capital of the region is Namur. Other important cities are: Liège, Charleroi, Mons, Tournai and Verviers.

Current Minister-President of the Walloon Government is Willy Borsus.

Wallonia is one of three regions in Belgium. The other two regions are Flanders (or Flemish Region) and Brussels-Capital Region.

All content from Kiddle encyclopedia articles (including the article images and facts) can be freely used under Attribution-ShareAlike license, unless stated otherwise. Cite this article:
Wallonia Facts for Kids. Kiddle Encyclopedia.