Liège and the new train station 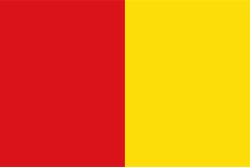 Liège (Walloon: Lîdje, Dutch: Luik, German: Lüttich) is a city in Belgium. It is the cultural centre of the Walloon region of Belgium and the capital of the province of Liège. Liège is also seat of a Roman Catholic bishop. In 2007, 188,907 people lived there.

The first written trace of the city was found in 558 as Leodicum or Vicus Leodicus. From 717, Liege was made the seat of a bishopric and became a cultural centre in the Middle Ages. These bishops ruled the city as Prince-Bishops until the 1790s. In the French Revolution, the cathedral was damaged, partially burned down and then completely detroyed. In the 19th century, the city lived on coal-mining, steel industry and trade. The region was the second biggest economic center in Europe after the UK in the 19th century.

Today Liege is a major educational hub, with a university and many high schools. It is a crossing point in Europe, Liège has the second biggest inner harbour and the 8th biggest cargo airport in Europe (Liège Airport). The city, that had a lot of problems since the 1970s because of the end of the steel industry and coal-mining, is now having a good economy thanks to the logistics and high tech industry (biotechnology, space industry, IT).

All content from Kiddle encyclopedia articles (including the article images and facts) can be freely used under Attribution-ShareAlike license, unless stated otherwise. Cite this article:
Liège Facts for Kids. Kiddle Encyclopedia.