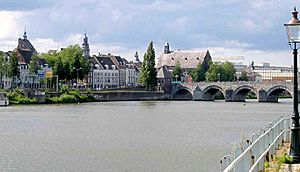 Old town of Maastricht looking over the river Maas.

Location of Maastricht in the Netherlands. 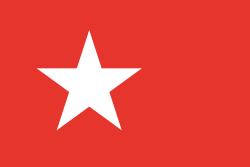 Maastricht (Limburgish: Mestreech) is a city in the south of the Netherlands. It is the capital city of the province of Limburg. About 120,000 people live there. Maastricht has an airport and a university (Maastricht University).

The first settlement in that region was founded in the Stone age about 25000 years ago, the first permanent settlement was founded by the Celts about 500 B.C. Maastricht got City Rights in 1204. Since 1815, after the Napoleonic Wars, Maastricht belongs to the Netherlands. The European Contract of 1992 was signed in Maastricht, the so-called Treaty of Maastricht.

The first settlement was about 25000 years ago. Real permanent settlements (and not just hunter gatherers) were founded at least as early as 5000 B.C. 4000 years after that, the Celts built a settlement in Maastricht. They presumably worshipped a River God. A Roman city was built around 0 AD, making Maastricht the oldest city of the Netherlands (together with Nijmegen). In this time, Maastricht was called Trajectum ad Mosam. This means Road across the Maas. A Roman bridge in Maastricht connected the west with the east, making Maastricht a very strategic point. This bridge - located at Eksterstraat - collapsed in the 13th century, and was replaced by the famous St. Servaas bridge.

Maastricht received its City Rights fairly early, in 1204. It was of strategic importance during the Eighty Years War and the Napoleonic Wars. Therefore, Maastricht has two forts; Fort St. Pieter and Fort St. Jan. Maastricht also had city walls. Remains of those walls can still be seen today (notably the Helpoort is one the few still standing City Ports). 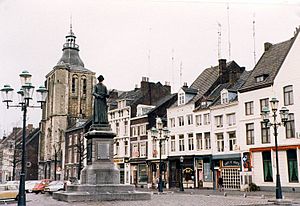 Statue of Minckeleers at Boschstraat

In the beginning of the 20th century, Maastricht was an industrial city, with many factory's. Jan Pieter Minckeleers - a scientist from Maastricht - was the first to discover Coal Gas, making the first city lights available. In 1940, Maastricht was conquered by the German forces. However, many paintings were hidden in the caves at Sint Pietersberg - a steep hill in the south-west of Maastricht. Even De Nachtwacht was hidden there. Maastricht was liberated on 14 September 1944. In 1992 Maastricht was the host-city for the 1992 European Treaty, where the EU was officially formed and a decision was made about the Euro.

Maastricht is located on both sites of the river Maas in the south-east of The Netherlands and the south-west of the province of Limburg. Maastricht lies in a valley, the Maasvalley, so hills surround the city. On the south-west of the city, the famous St. Pietersberg is located. On the western edge of the city, there is no space between the city and the Belgian border. On the east, is the Savelsbos (a forest). Neighbouring municipality's are Eijsden and Visé (B) in the south, Lanaken (B) and Riemst (B) in the west, Meerssen and Valkenburg in the north, and Margraten in the east.

The city can easily be reached. There is a highway (A2; E25) running from the south to the north (within the Netherlands, this highway runs from Eijsden to Amsterdam). Another highway also begins in Maastricht, the A79 (going to the east). Maastricht has two train stations (Maastricht and Maastricht Randwyck). Trains are going to Amsterdam, Heerlen, Roermond, and Brussels (B). Plans are made to re-establish the old train route to Lanaken (B). If this connections is to be made again, Maastricht will be accessible from all directions by train.

A few kilometres north of Maastricht, is the Maastricht Aachen Airport. That's the second airport of The Netherlands. 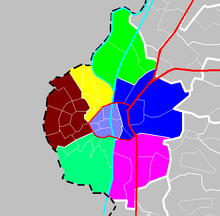 Districts according to CBS

Maastricht is divided into many areas. The areas Heer, Amby, St. Pieter, and Wolder used to be individual villages, but are now (for a few decades) part of Maastricht. According to the Dutch central bureaus of statistics (Centraal Bureau voor de Statistiek; CBS), Maastricht can be divided into seven larger districts. These are:

All content from Kiddle encyclopedia articles (including the article images and facts) can be freely used under Attribution-ShareAlike license, unless stated otherwise. Cite this article:
Maastricht Facts for Kids. Kiddle Encyclopedia.