Provinces of the Netherlands facts for kids 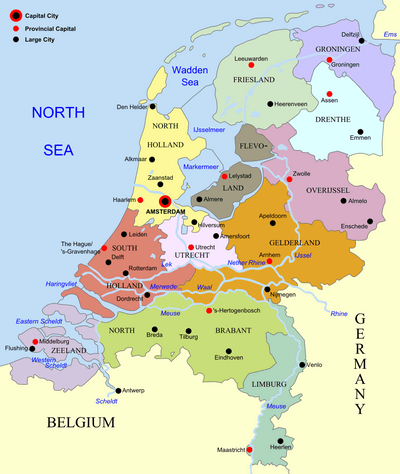 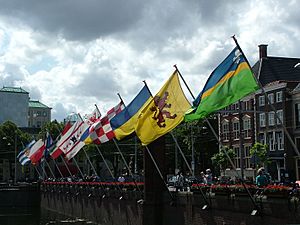 Flags of the provinces flown at the Hofvijver in The Hague. 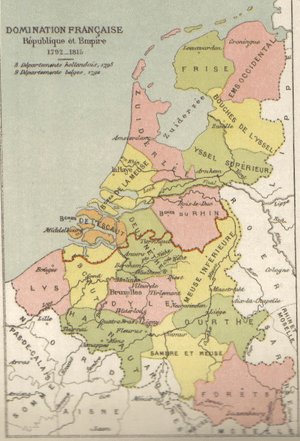 Map of the subdivisions of the Netherlands during French administration. Note that East Frisia is not included in this (later) map.

The twelve provinces are listed below with their capital city:

A Dutch province is the administrative layer in between the national government and the local municipalities. It has the responsibility for matters of regional importance. The government of each province is made of three major parts: the Provinciale Staten which is the provincial parliament elected every four years. Elected from its members are the Gedeputeerde Staten, a college charged with most executive tasks. This college is presided by the Commissaris van de Koningin or royal commissioner, appointed by the Crown.

Almost all Dutch provinces came from a medieval state, like a county or duchy. This is the same with the regions of Belgium. Their status changed once they came under the influence of a ruler. This single ruler then centralised their administration. They then became provinces of a larger state. In total there are 17 provinces today. From these unified Netherlands, seven northern provinces formed the Republic of the Seven United Provinces in the 16th century. These were Holland, Zeeland, Gelderland, Utrecht, Friesland, Overijssel and Groningen. The Republic's lands also included Drenthe (one of the 17, but without the autonomous status of the others), and parts of Brabant, Limburg and Flanders, which were considered to be "conquered lands" and were governed directly by the Staten-Generaal, the parliament. From this came their name Generality Lands. They were called Staats-Brabant, Staats-Limburg and Staats-Vlaanderen, meaning "of the state". Each of these "Netherlands" had a high degree of autonomy. They co-operated with each other mainly on defense and on the international level in general. They kept to their own affairs elsewhere.

On January 1, 1796, during the Batavian Republic, Drenthe and Staats-Brabant became the eighth and ninth provinces of the Netherlands; the latter known as Bataafs Brabant, Batavian Brabant, changing its name to Noord Brabant, North Brabant, in 1815 when it became part of the United Kingdom of the Netherlands. This kingdom also contained (then) South Brabant, a province in Belgium. This new unified state featured the provinces in their modern form. Today, they are non-autonomous subdivisions of the national state. There are again numbering 17 provinces, though not all are the same as the 16th century ones. In 1839, with the independence of Belgium, the original single province of Limburg was divided between the two countries. Each country now has a province called Limburg. A year later, Holland, the largest and most populous of the Dutch provinces, was also split into two provinces for a total of 11. The 12th member was to be Flevoland, a province consisting almost entirely of reclaimed land, established on January 1, 1986.

The Departments of the French Period

During the Batavian Republic, the Netherlands were from 1798 to 1801 completely reorganised into 8 new departments, most named after rivers, inspired by the French revolutionary example, in an attempt to do away with the old autonomous provincial status. They are listed below, with their capitals and the territory of the former provinces they mostly incorporated:

After only three years, following a coup d'état, the borders of the former provinces were restored, though not their autonomous status. They were now also called "departments" and Drenthe was added to Overijssel. In 1806 the Kingdom of Holland replaced the republic to further French interests. It was during this administration that Holland was first split in two, with the department of Amstelland to the north and that of Maasland to the south. East Frisia, then as now in Germany, was added to the kingdom as a department in 1807 and Drenthe split off again making a total of 11 departments.

When the Netherlands finally did become fully part of France in 1810, the departments of the kingdom and their borders were largely maintained, with some joined together. They were however nearly all renamed, again mainly after rivers, though the names differed from their Batavian counterparts. Following are their names and the modern day province they corresponded for the most part to:

With the defeat and withdrawal of the French in 1813, the old provinces and their names were re-established, Holland was reunited and East-Frisia went its separate way. The 17 provinces of the United Kingdom of the Netherlands were for a significant part based on the former French departments and their borders, in particular in what would later become Belgium. -->

All content from Kiddle encyclopedia articles (including the article images and facts) can be freely used under Attribution-ShareAlike license, unless stated otherwise. Cite this article:
Provinces of the Netherlands Facts for Kids. Kiddle Encyclopedia.