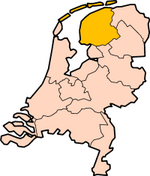 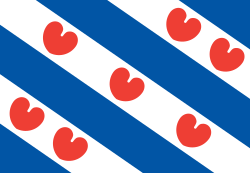 Friesland (Fryslân in Frisian, Friesland in Dutch) is a province in the north of the Netherlands. The capital (city) of Friesland is Leeuwarden (Ljouwert in Frisian). People in Friesland speak Frisian and Dutch. People also speak Frisian in a small part of Groningen (province), and in East Friesland and North Friesland in Germany. In North Holland there is a region called West Friesland, but people who live there are not called Frisians.

Agriculture and tourism, on the lakes and the isles in the Wadden Sea, are important sources of income.

The province is also famous for its ice skaters and its Elfstedentocht (Eleven cities tour), an ice skating race of 200 kilometers.

In Friesland the Frisians live. They are an old ethnic group. Members of this ethnic group are:

All content from Kiddle encyclopedia articles (including the article images and facts) can be freely used under Attribution-ShareAlike license, unless stated otherwise. Cite this article:
Friesland Facts for Kids. Kiddle Encyclopedia.