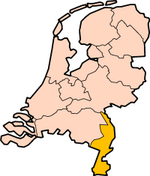 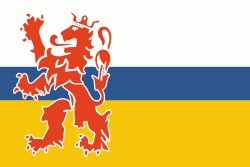 Other meanings are at Limburg

Limburg is the southernmost province of the Netherlands. Its capital is Maastricht. It is the only province in the Netherlands which has hills. It is a very old province; the capital city, Maastricht, is over 2000 years old. The Limburgish people do speak Dutch, but they also speak their own dialects. These dialects - especially the ones in the South of Limburg, the normal Dutch people find difficult to understand. These dialects have many influences from German and French. The Limburgish are renowned for their famous vlaai.

Limburger cheese comes from this region.

All content from Kiddle encyclopedia articles (including the article images and facts) can be freely used under Attribution-ShareAlike license, unless stated otherwise. Cite this article:
Limburg (Netherlands) Facts for Kids. Kiddle Encyclopedia.