The German language (German: Deutsch or (die) deutsche Sprache) is a West Germanic language in the Indo-European language family.

It is spoken in Germany, Austria, Switzerland, Liechtenstein and Luxembourg; natively by around 100 million people. It is the most widely spoken mother tongue in the European Union. There are some people who speak German in Belgium and in the Netherlands, as well as in France and Northern Italy. There are people who speak German in many countries, including the United States and Canada, where many people emigrated from Germany. In Eastern Europe, too, in Bulgaria, Romania, Russia, etc.

German is a part of the West Germanic language family (a group of languages that are similar) and is much like English and Dutch. A lot of the vocabulary in German is related to English, but the grammar is more complicated. German has a system of cases, and when helping verbs are used, the main part of the verb must be moved to the end of the sentence. For example, "Someone has stolen my car" is Jemand hat mein Auto gestohlen (Someone has my car stolen) or, "Someone called me last night" is Jemand hat mich letzte Nacht angerufen (Someone has me last night called).

In German writing, every noun must start with a capital letter. English and Danish also did this long ago, but not now. Today, German is the only language that has this rule.

While German is an official language in Switzerland, the Swiss dialect of German is difficult for native speakers from Germany, and even for Swiss who are not native to speaking German, to understand. One reason why the dialects are still so different today is that even though Switzerland adopted Standard German, mostly as a written standard, German Swiss in WWII wanted to separate themselves from the Nazis by choosing to speak the Swiss dialect over the standard dialect. Swiss German also has some differences in writing, for example, the letter ß, which is only seen in German, is always replaced by ss. 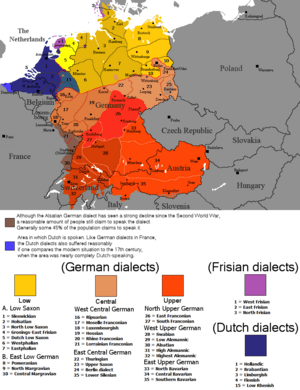 German loanwords in the English language

English has taken many loanwords from German, often without any change of spelling (aside from, often, the elimination of umlauts and not capitalizing nouns):

Some German words with English translations

All content from Kiddle encyclopedia articles (including the article images and facts) can be freely used under Attribution-ShareAlike license, unless stated otherwise. Cite this article:
German language Facts for Kids. Kiddle Encyclopedia.