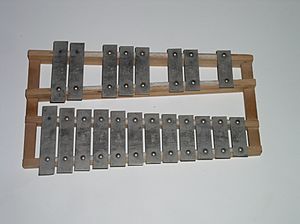 The glockenspiel is a percussion instrument type, in the same musical instruments category as the xylophone and timpani, usually has a range of 2 and a half octaves and is set up in a keyboard instrument format, similar to the xylophone but unlike that wooden instrument, it is a metallophone, is played by hitting it with mallets with a plastic or felt tip, and has a soft sound, but that is very high pitch. If it is hit too hard, it makes a very bad sound, is often used to represent things such as fairies, birds, and butterflies, and it is from Germany. 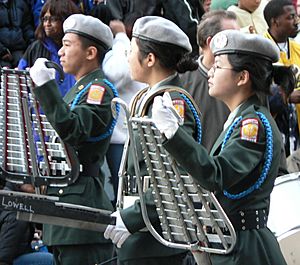 Two bell lyres in use

In the United Kingdom, the United States, and Canada, there is a form of glockenspiel called a bell lyre, bell lyra, or lyra-glockenspiel. The bell lyre is a form of glockenspiel commonly used in marching bands. It is played upright and has an extendable spike which is held on a strap. The player marches with the strap over his shoulder and plays the instrument upright with a beater. Another variation of the bell lyre exists which is held by a strap round the shoulders and back. This variation is played horizontally with two beaters as it does not need to be held upright. Since the middle of the 19th century this form of the instrument has also been used in military and civil bands in Germany, where it is called a Stahlspiel or Militär-Glockenspiel. The all-percussion Drum and lyre corps in the Philippines uses this as a main instrument.

All content from Kiddle encyclopedia articles (including the article images and facts) can be freely used under Attribution-ShareAlike license, unless stated otherwise. Cite this article:
Glockenspiel Facts for Kids. Kiddle Encyclopedia.