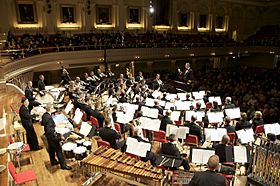 The songs written for the concert band are much more easy to listen because of its repertoires. The repertoires are not only about the orchestral composition. Light music, jazz, march and popular tunes are also played. Even though people don't have special knowledge about it, anyone can enjoy the concert band music. It is highly acclaimed for both its quality and popularity. As the arrangement of concert band music is completed in the 20th century,its modern and dynamic style appeals general public. Plus, many conductors conduct concert bands attracted by its unique orchestration. 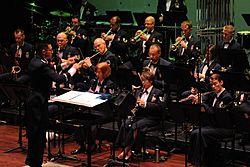 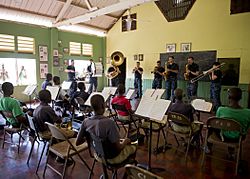 In the School Concert Band class

A concert band can be divided into four groups; Professional bands, Military bands, School bands, and Community bands. Except for the professional bands, others are named for the location where the performers play.

Performers playing in the professional band consider the concert band members as their job. There are many professinal bands in the world.

School bands refer to the groups consisting student players in school. In elementary, middle, high school and university, there are many students playing wind instruments for a concert or event. People included here also can be divided into two groups. Playing them as their hobbies or studying them as their majors.

A community band is a community-based ensemble. It is sponsored by town or city. Some are professional players but the others may not. Community bands also include the union based on their workplace. 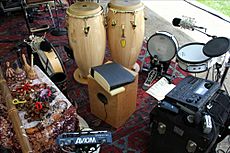 A percussion instrument is an instrument, such as a drum, xylophone, piano, or maraca, in which sound is produced by one object striking another or by being scraped or shaken.

All content from Kiddle encyclopedia articles (including the article images and facts) can be freely used under Attribution-ShareAlike license, unless stated otherwise. Cite this article:
Concert band Facts for Kids. Kiddle Encyclopedia.