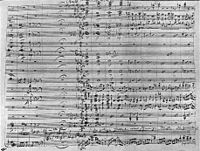 A hand-written musical score for Act 2 of the opera Der Freischütz by Carl Maria von Weber, written in the 1820s. The score contains all the parts for the singers and the accompaniment parts and melodies for the orchestra.

Orchestration in music can have two meanings:

It can mean: the study of how to write music for an orchestra.

It can also mean the list of instruments that are used in a particular piece of music.

Orchestration is all about understanding how to write well for different instruments, how to combine them so that they sound well together and balance well.

Sometimes composers leave the orchestration of their works to other people. Leonard Bernstein is famous as the composer of West Side Story, but although he composed all the notes he left it to other people to orchestrate. The composer Maurice Ravel took a piano piece by Modest Mussorgsky (who had died forty years earlier) called Pictures at an Exhibition and arranged it for orchestra. Most people know this version rather than Mussorgsky’s piano version.

Hector Berlioz and Nikolai Rimsky-Korsakov are two famous composers who were particularly brilliant at writing for orchestra. They both wrote books on orchestration which are still very useful today.

All content from Kiddle encyclopedia articles (including the article images and facts) can be freely used under Attribution-ShareAlike license, unless stated otherwise. Cite this article:
Orchestration Facts for Kids. Kiddle Encyclopedia.