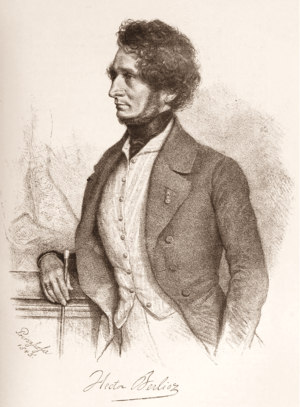 Hector Berlioz (born La Côte-St-André, Isère, 11 December 1803; died Paris, 8 March 1869) was a French composer. He was one of the greatest composers of the 19th century. His music is typical of the Romantic period: full of passion and often based on ideas outside music. He was not particularly good at playing any instrument, but he was brilliant at writing for the orchestra. Some of his most famous works include several orchestral overtures, the Symphonie Fantastique, the opera Les Troyens (The Trojans), the requiem Grande messe des morts and the song cycle Les nuits d'été (Summer Nights). He was very original as a composer, and his music was not fully appreciated until many years after his death.

Berlioz was the eldest of six children. One brother and one sister lived to be adults, and Berlioz was always very fond of them both. His father was a doctor. The family lived in the country, north west of Grenoble.

Berlioz only went to school for a short time, when he was ten years old. The rest of his education he had from his father. He liked French and Latin literature and travel books about faraway countries. He learned to play the flute, the flageolet and the guitar. He read a book by Rameau about harmony. He never had a piano. He just imagined the sounds of chords in his head. He was only 12 when he fell in love with a girl called Estelle who was 18. He was teased about it a lot. He started to compose some music.

When he was 17 his father said that he wanted him to be a doctor. Berlioz wanted to study music, but his father made him go to Paris to study medicine. Berlioz was to stay in Paris for the rest of his life. He studied medicine for two years, but he hated it. One day, in an anatomy lesson, he had had enough and jumped out of the window. He started to study music. His father was furious and stopped sending him money. Berlioz was very poor and started writing musical criticism for newspapers. This is how he earned most of his money for the rest of his life. He was also borrowing money from friends.

Berlioz started going to the Opéra. He particularly liked the music of Gluck and went to the library to study Gluck’s scores. At the end of 1822 he found a good teacher. His name was Le Sueur. He made Berlioz stop publishing his music until he had learned to compose properly. In 1826 he was officially a student at the Conservatoire. He continued to study with Le Sueur and with Reicha. He tried four times to win the important music prize called Prix de Rome. The first time he wrote a piece called La Mort d’Orphée (The Death of Orpheus). The judges said it was unplayable, but Berlioz got an orchestra to play it. The second time he wrote a piece called Herminie which had a tune he used later as the main tune for his Symphonie fantastique. The third time he wrote a cantata La mort de Cléopâtre which is a wonderful work but he still did not win the prize. The fourth time he wrote a cantata La mort de Sardanapale, and he won the prize. Nearly all the music for this work is now lost.

Berlioz did not understand any English, but he went to a performance of Shakespeare’s Hamlet given by an English theatre company. The actress taking the part of Ophelia was called Harriet Smithson. Berlioz fell passionately in love with her, although he did not know her, and started following her about everywhere. In the end he married her. The marriage was not a success. Berlioz was really in love with Ophelia, the character from Shakespeare’s play. He found it hard to love Harriet in real life.

Shakespeare’s plays, however, were to be a great inspiration for Berlioz. He wrote many works which are inspired by Shakespeare, including Roméo et Juliette, Béatrice et Bénédict, Roi Lear and several others. He was also inspired at this time by Goethe’s Faust as well as by many other writers including E.T.A. Hoffmann, Scott and Byron. He also discovered the music of Beethoven which helped him to learn how to give shape to large compositions.

Berlioz started to be very busy putting on concerts of his music in Paris. He was quickly becoming known as a very original young composer. Winning the Prix de Rome gave him a steady income for a time, but he was supposed to go to Rome. Berlioz did not want to go to Rome. He said that he had plenty of work in Paris. The real reason why did not want to go was probably because he was in love with a 19- year-old girl called Camille Moke. 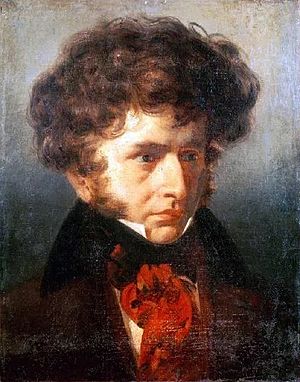 Painting of a young Berlioz by Émile Signol, 1832.

Berlioz spent 15 months in Rome. On his way there he visited his parents who seemed to have forgiven him for not studying medicine. They could now be proud because their son was so successful. In Italy Berlioz did not write much music. He did not like Italian music or Italian art, but he was inspired by the countryside, the sun, the sea, the people he met: sailors, peasants, sculptors, travellers. He did not like the city of Rome, although he did like Florence. He hated the Villa Medici, the house where he had to stay. When he travelled about he wrote some music. When he heard the news that Camille now loved another man he became so furious that he left Rome in order to return to Paris to kill them both. However, when he got as far as Nice he calmed down and changed his mind. He returned to Rome.

At the end of his time in Italy he returned to Paris, visiting his parents on the way. He started organizing concerts of his music. This is when he got to know Harriet Smithson. They had a strange courtship and he married her in 1833. The next year they had a son. The marriage was never easy. Their personalities were different, they were poor, and they did not speak one another’s language. In 1842 they separated and Harriet died in great poverty in 1854.

Although a few people thought that Berlioz was an original composer, many others thought his music was very strange. He hardly earned any money from composing. Most of the money he earned came from musical journalism, which is something he hated. When his works were performed, he usually conducted them himself. He wrote a work for viola and orchestra called Harold en Italie. Paganini had asked him to write it for him to play, but when Paganini saw the music he did not like it because it was not “showy” enough for the viola. Some years later Paganini heard the work and decided he liked it, so he paid Berlioz 20.000 Francs. This was a lot of money, and it made it possible for Berlioz to spend time writing a big new work: Roméo et Juliette. When this was first performed some critics thought that Berlioz did not understand Shakespeare probably. However, Richard Wagner, who was in the audience at the first performance, was very impressed. Berlioz tried to be successful as an opera composer, but people did not understand his original music. He wrote a Grand symphonie funèbre et triomphale, originally written for a military band. Les nuits d'été is a very moving song-cycle. 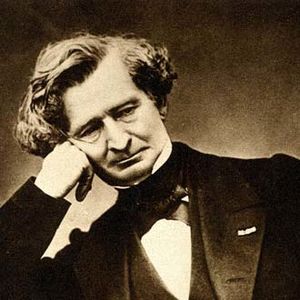 During the 1840s and 1850s Berlioz spent much of his time travelling abroad. He went to Germany, Austria, Russia and England. He was becoming more famous abroad than at home in France, although he still continued to go back to Paris. The Germans loved his music and were impressed by his conducting. He rarely conducted anything except his own music. In 1846 he composed one of his finest works: La Damnation de Faust which was performed in the Opéra-Comique. The opera house was half empty. It was a great disappointment to him. Berlioz continued to tour to other countries where people appreciated him. He had great success in St Petersburg, in Berlin where he performed to the King of Prussia, and in London, where he never got paid for the concerts that Jullien conducted because Jullien had no money left. However, he had other successes in London and the English liked him very much.

In 1854 Harriet Smithson died and seven months later Berlioz married Marie Recio, a singer he had known for 12 years. Her Spanish mother came to live with them, and she looked after Berlioz very kindly in his last years when he was ill. Berlioz’ son Louis had become a captain in the navy and travelled all over the world. This was something Berlioz had always dreamt of doing since his childhood when he used to read travel books. Berlioz was terribly sad in 1867 when he heard that Louis had died in Havana of yellow fever.

Berlioz had always had a passion for the Latin poet Virgil. In 1856 he spent a long time writing a long opera in five acts called Les Troyens (The Trojans). He knew it would be almost impossible to find anyone who would put on a performance. It only became possible in 1863 after he had divided the work into two parts. After that it was 30 years before the opera was performed again. It contains some of his best music. The storm scene is especially famous and often performed separately as an orchestral piece.

As he got older he became obsessed with death. He had lost two wives, and his two sisters had also died. He started to walk in cemeteries. He wrote his Memoires (autobiography). It has been translated into many languages including English.

In 1863 he wrote to Estelle, the girl he had loved when he was a child. She was now a widow of 67 and he was 60. He visited her in Lyons and loved her again. He wrote regularly to her for the rest of his life, and stayed with her three times in Grenoble where she lived with her son. She gradually understood him better, and she gave him much happiness during his last years.

A final journey to St Petersburg was too much for Berlioz. He became ill. He went to Nice on the way home, where he twice collapsed while walking by the sea. He went back to Paris where he was cared for by his mother-in-law. He died on 11 March 1869 and was buried in the Cimitière Montmartre.

Berlioz is a clear example of a “prophet who is without honour in his own country”: not many people in France realized he was a great composer, but in other countries he was welcomed as one of the great composers and conductors of his day. Many of his works are difficult to describe. His Symphonie fantastique is not quite a symphony, his Harold en Italie is not quite a concerto. His Requiem is not a normal, religious requiem, Roméo et Juliette is a mixture of all sorts of things. He wrote five operas, which are all very different in style. His songs are tender and lovely, influenced by the French romance. His overtures are very popular at orchestral concerts. His music is very original and, although he wrote a book on orchestration, the sounds he composed were so personal that no one could imitate him. He was not good at playing any instrument, but could imagine all the sounds in his head. Many of his melodies stretch themselves over an unusual number of bars. A lot of his orchestral music is programme music: it is often inspired by books or wild stories in his imagination.

All content from Kiddle encyclopedia articles (including the article images and facts) can be freely used under Attribution-ShareAlike license, unless stated otherwise. Cite this article:
Hector Berlioz Facts for Kids. Kiddle Encyclopedia.