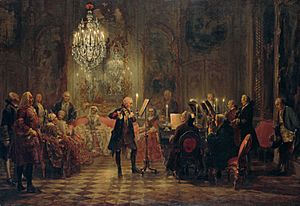 Frederick the Great playing a flute concerto in Sanssouci, Carl Philipp Emanuel Bach C. P. E. Bach at the piano, Johann Joachim Quantz is leaning on the wall to the right; by Adolph Menzel, 1852

A concerto is a piece of music made for a solo instrument and an orchestra. When an orchestra plays at a concert they might play a symphony (a piece for orchestra) and they might play a concerto (with a soloist). If the solo instrument is a violin the piece is called a “violin concerto”, if it is a piano it is called a “piano concerto”, etc. The orchestra accompanies the soloist. This means that it is the soloist who decides how fast or slow to play. The conductor should listen to the way the soloist wants to play and make the orchestra accompany sensitively.

The word “concerto” is an Italian word (the second “c” is pronounced like an English “ch”). It means “agreeing” or “playing together”. The English plural is “concertos”.

The concerto became popular during the 17th century in Italy. Some concertos had several soloists instead of just one. This kind of concerto was called a concerto grosso.

The concerto in the Baroque period

The solo concerto became popular with composers like Antonio Vivaldi (1678-1741) who wrote over 400 concertos for various instruments. His most famous concertos are a group of four known as The Four Seasons. These are violin concertos, and each concerto deals in turn with one of the seasons: spring, summer, autumn and winter. Many other Baroque composers wrote concertos: Johann Sebastian Bach (1685-1750) wrote several concertos for violin although only two have survived, the others have been lost. He also wrote solo concertos for the harpsichord. George Frideric Handel (1685-1759) wrote concertos for the organ. Organs in England were very small in those days and balanced well with an orchestra. Handel sometimes put pauses in his concertos where the soloist could improvise (make up) some music. These improvised bits became known as “cadenzas”. Concertos ever since have cadenzas where the soloist can show how brilliant they are at playing and at improvising. Some composers wrote their own cadenzas.

The concerto in the Classical period

In the Classical period Joseph Haydn (1732-1809) wrote a few concertos including two for the cello, but he is better known for his symphonies. It was Wolfgang Amadeus Mozart (1756-1791) who wrote many wonderful piano concertos. This was at a time when the piano was a new instrument. Mozart was a brilliant pianist and he wrote most of them for himself to perform. He also wrote five violin concertos, four horn concertos, two flute concertos and a clarinet concerto. He also wrote concertos for more than one soloist e.g. a flute and harp concerto and a violin and viola concerto which he called Sinfonia Concertante. By this time concertos always had three movements: a fast one (usually in sonata form), a slow one, and a fast movement (often a rondo) to finish with.

Ludwig van Beethoven (1770-1827) became famous as a pianist before he was known as a composer. He wrote five piano concertos. The last one, known in English-speaking countries as the Emperor Concerto, is a very big, powerful work which looks forward to the music of the Romantic period. Beethoven wrote a beautiful violin concerto. At the time everyone thought it was too hard for the soloist to play, but as composers wrote harder and harder music the players had to become better and better. Nowadays every professional violinist should be able to play it. Beethoven also wrote a Triple Concerto for piano, violin, cello and orchestra.

The concerto in the Romantic period

The 19th century is known as the age of Romanticism. People adored creative men like artists, musicians and writers (the time for women to be equal had not yet come). They were seen as heroes. The concerto fitted in very well with this way of thinking. The soloist was a great hero, and the concerto enabled him to show off his great technique. The violinist and composer Niccolò Paganini (1782-1840) was one of these great heroes. He played the violin like no one else had ever done, and because he was a thin, skinny man with a pale face and long hair people thought he looked like the devil. He wrote violin concertos which at the time only he could play.

Some of the most famous violin concertos of the 19th and 20th centuries include those by Felix Mendelssohn, Max Bruch (no 1), Johannes Brahms, Pyotr Ilyich Tchaikovsky, Edward Elgar, Dmitri Shostakovich (no 1), Béla Bartók, Alban Berg, Igor Stravinsky and Sir William Walton.

There are viola concertos by Paul Hindemith and William Walton, and Hector Berlioz wrote Harold in Italy which is like a viola concerto.

Béla Bartók wrote a piece called Concerto for Orchestra. He gave it this title because, although it is a piece for orchestra (like a symphony), there are lots of solos for the different instruments. Other composer, such as Alan Hovhaness, have also written concertos for orchestra.

Sir Peter Maxwell Davies has written ten concertos, each for a different solo instrument. They are known as the "Strathclyde Concertos".

All content from Kiddle encyclopedia articles (including the article images and facts) can be freely used under Attribution-ShareAlike license, unless stated otherwise. Cite this article:
Concerto Facts for Kids. Kiddle Encyclopedia.