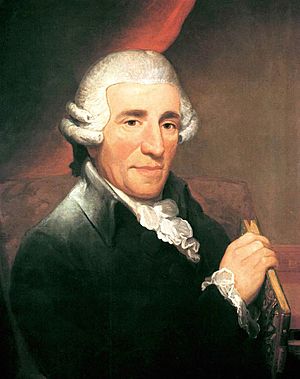 (Franz) Joseph Haydn (31 March 1732 – 31 May 1809) was an Austrian composer of the Classical period. He was instrumental in the development of chamber music such as the piano trio. His contributions to musical form have earned him the epithets "Father of the Symphony" and "Father of the String Quartet".

Haydn spent much of his career as a court musician for the wealthy Esterházy family at their remote estate. Until the later part of his life, this isolated him from other composers and trends in music so that he was, as he put it, "forced to become original". Yet his music circulated widely, and for much of his career he was the most celebrated composer in Europe.

He wrote brilliant operas and inspired many great composers after him. He was a friend and mentor of Mozart, a teacher of Beethoven, and the older brother of composer Michael Haydn.

Some of Haydn's most famous works were 'the seasons' and 'the creation'. The house that he lived in, in Vienna, where he wrote these works, has been turned into a museum called 'haydnhaus'.

On 15 June, a memorial service for his death 1809 was held in the Schottenkirche at which Mozart's Requiem was performed. Haydn's remains were interred in the local Hundsturm cemetery until 1820, when they were moved to Eisenstadt by Prince Nikolaus. His head took a different journey; it was stolen shortly after burial by phrenologists, and the skull was reunited with the other remains only in 1954.

All content from Kiddle encyclopedia articles (including the article images and facts) can be freely used under Attribution-ShareAlike license, unless stated otherwise. Cite this article:
Joseph Haydn Facts for Kids. Kiddle Encyclopedia.