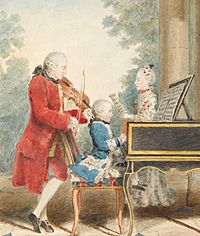 Wolfgang Amadeus Mozart (seated at the keyboard) was a child prodigy virtuoso performer on the piano and violin. Even before he became a celebrated composer, he was widely known as a gifted performer and improviser.

The dates of the Classical period in Western music are generally accepted as being between about the year 1730 and the year 1820. However, the term classical music is often used in a colloquial sense as a synonym for Western art music which describes a variety of Western musical styles from the Middle Ages to the present, and especially from the seventeenth century to the nineteenth.

The Classical period falls between the Baroque and the Romantic periods. Classical music has a lighter, clearer texture than Baroque music and is less complex.

The best-known composers from this period are Joseph Haydn, Wolfgang Amadeus Mozart, Ludwig van Beethoven, and Franz Schubert; other notable names include Luigi Boccherini, Muzio Clementi, Antonio Salieri, Leopold Mozart, Johann Christian Bach, Carl Philipp Emanuel Bach, and Christoph Willibald Gluck. Ludwig van Beethoven is regarded either as a Romantic composer or a Classical period composer who was part of the transition to the Romantic era. 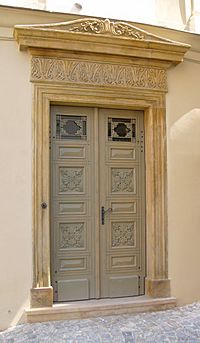 Classicist door in Olomouc, The Czech Republic. An example of Classicist architecture, which shows the style that also influenced music of the era.

In the middle of the 18th century, Europe began to move toward a new style in architecture, literature, and the arts, generally known as Classicism. This style sought to emulate the ideals of Classical antiquity, especially those of Classical Greece. Classical music was still tightly linked to aristocratic Court.

The new style was also encouraged by changes in the economic order and social structure. As the 18th century progressed, the nobility became the primary patrons of instrumental music, while public taste increasingly preferred lighter, funny comic operas.

While vocal music such as comic opera was popular, great importance was given to instrumental music. The main kinds of instrumental music were the sonata, trio, string quartet, symphony, concerto (usually for a virtuoso solo instrument accompanied by orchestra), and light pieces such as serenades and divertimentos. Sonata form developed and became the most important form. It was used to build up the first movement of most large-scale works in symphonies and string quartets.

Mozart's arrival in Vienna in 1780 brought an acceleration in the development of the Classical style. There, Mozart absorbed the fusion of Italianate brilliance and Germanic cohesiveness that had been brewing for the previous 20 years. It was during this decade that public taste began, increasingly, to recognize that Haydn and Mozart had reached a high standard of composition. During this decade Mozart composed his most famous operas, his six late symphonies that helped to redefine the genre, and a string of piano concerti that still stand at the pinnacle of these forms. 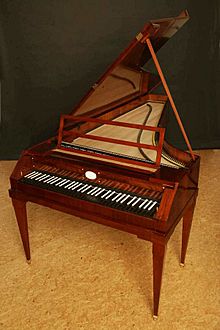 In the Baroque era, there was more variety in the bowed stringed instruments used in ensembles, with instruments such as the viola d'amore and a range of fretted viols being used, ranging from small viols to large bass viols. In the Classical period, the string section of the orchestra was standardized as just four instruments:

All content from Kiddle encyclopedia articles (including the article images and facts) can be freely used under Attribution-ShareAlike license, unless stated otherwise. Cite this article:
Classical period (music) Facts for Kids. Kiddle Encyclopedia.