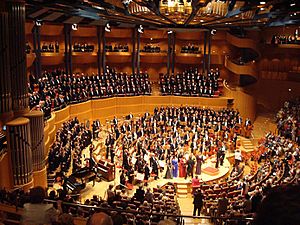 Symphonies are extended compositions written for orchestra. Pictured here is a performance of the 8th Symphony of Gustav Mahler in the Kölner Philharmonie. The orchestra is the Wuppertaler Sinfonieorchester, conducted by Heinz-Walter Florin.

A symphony is a piece of music written for an orchestra to play. It may be quite a long piece. Usually it is divided into parts, usually 3 or 4 parts, which are called movements.

The first movement of a symphony can be a fast movement, often in sonata form. The second movement can be a slow movement. The third movement can be a minuet or scherzo and a trio. The fourth movement may be called “Finale”; it can be in Rondo form or sonata form or a combination of these. There are lots of different ways of writing a symphony, but this is the pattern that was used by Joseph Haydn who is known as the “Father of the Symphony”, and many composers since have used his pattern of movements for their symphonies.

The word “symphony” comes from the Greek words “sym” (together) and “phone” (sound).

“Symphonic” means “like a symphony”. It is often used to describe music which is quite long and develops tunes over a long period.

All content from Kiddle encyclopedia articles (including the article images and facts) can be freely used under Attribution-ShareAlike license, unless stated otherwise. Cite this article:
Symphony Facts for Kids. Kiddle Encyclopedia.