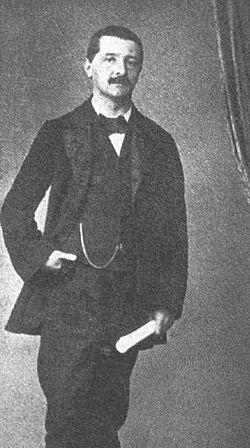 Anton Bruckner (born Ansfelden, Austria, 4 September 1824; died Vienna, 11 October 1896) was an Austrian composer. He is especially famous for his nine symphonies. They are all very long and are written in a late Romantic style for a large orchestra. He was also an organist and teacher.

Bruckner’s father was an organist and schoolmaster in a small village in Austria. By the age of four Bruckner was showing musical talent. He played hymn tunes on a tiny violin and then found the chords to go with them on the family spinet. When he was ten he sometimes played the village organ for services. After his father’s death in 1837 he became a choirboy at the monastery school of St Florian where, in 1848, he became the organist of the abbey church. He started composing at this time and wrote a Requiem in d minor. He liked the music of Schubert and Mendelssohn and they influenced the way he composed.

Although he was happy at St Florian his friends told him he ought to look for a better job. They made him apply for the job of organist at the cathedral of Linz which he got easily. Meanwhile, he was trying to learn more about harmony and took a course with a famous teacher Simon Sechter. He then took a course in orchestration with the teacher Otto Kitzler. He became very interested in the music of Romantic composers like Liszt, Berlioz and especially Wagner. In 1864 he wrote a Mass in d minor for chorus and orchestra which clearly showed Wagner’s influence. In 1866 he finished the first of his nine symphonies. He also wrote some very beautiful motets which are among the best music of the 19th century written for the Roman Catholic church.

In 1866 he spent three months in a sanatorium after a nervous collapse. During his later years he often suffered from depression.

In 1868 he became professor at the Vienna Conservatoire where he taught harmony and counterpoint. This was an excellent job. The last 25 years of his life he spent his time teaching and composing his symphonies. He also travelled and gave organ recitals at Notre Dame in Paris and the Royal Albert Hall and Crystal Palace in London.

His music was very modern for its time and some people, including the famous music critic Eduard Hanslick, did not like it. Hanslick said that Bruckner composed like Wagner, but although Bruckner had learned from Wagner he did not simply copy him. Bruckner’s music shows his own strong personality. Hanslick, who preferred the symphonies of Brahms, did Bruckner a lot of harm by writing bad reviews of his music. He was Dean of the Music Department at the university in Vienna and did not want Bruckner to be appointed lecturer at the University. However, Bruckner did get that job in 1875. He became more and more famous, especially after the great conductor Arthur Nikisch conducted the first performance of his Symphony no 7 in the Leipzig Gewandhaus in 1884. He was given many honours. At the time of his death he had not yet finished his Symphony no 9. He was buried in St Florian.

Bruckner always remained a simple person who dressed and behaved like someone from a small village. He never felt very self-confident and was always asking other people whether he was good enough for his job. He never married or had a proper relationship with anyone although he fell in love with several young women.

Bruckner’s symphonies show a wonderful ability to develop ideas slowly over a long period of time. Some of the slow movements last about 30 minutes. His music builds up in stages to big climaxes in a similar way to organ music. His scherzos (third movements) are tuneful dance movements which often sound like country dances. His music shows great harmonic and polyphonic skills. Bruckner often made revisions (changes) to his music. This often makes a problem for conductors today as they have to decide which version to use. Many musicians think that often Bruckner’s first versions were the best. The revisions were often cuts to make a symphony shorter so that orchestras would be more likely to play it, but the cuts spoil the flow of the music. Nowadays we recognize Bruckner as one of the greatest writers of symphonies as well as a great composer of choral music.

All content from Kiddle encyclopedia articles (including the article images and facts) can be freely used under Attribution-ShareAlike license, unless stated otherwise. Cite this article:
Anton Bruckner Facts for Kids. Kiddle Encyclopedia.